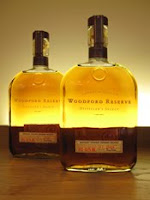 Prize winning bourbon
Woodford Reserve is a bourbon that is produced in small batches by the Labrot & Graham distillery. The distillery is located in the American state of Kentucky, close to the town of Versailles. Woodford Reserve whiskey is presented in a recognisable narrow square bottle and varies in strength from 43-46% ABV, depending on the batch. It is made using a secret combination of corn, rye and malted barley grains and is the only bourbon that undergoes a triple distillation (most others are distilled twice). Woodford Reserve is the official bourbon of the world famous Kentucky Derby horse race and has won many prizes worldwide. These include a Double Gold Medal at The World Spirits Competition in 2000 and this made it the first bourbon to ever win that prestigious prize.

Kentucky's oldest
The distillery was founded in 1812 by Elijah Pepper, making it the oldest operational whiskey distillery in Kentucky. Kentucky is widely regarded as the heart of the American whiskey industry. The current distillery buildings were erected in 1838 and it was named the Oscar Pepper Distillery after Elijah's son. In 1878, Leopold Labrot and James Graham became the new owners and they changed the name to the Labont & Graham Distillery. This name appears on the current bottles of Woodford Reserve.

The birth of Woodford Reserve whiskey
Labont and Graham ran the distillery until 1941, when they sold up to the Brown-Forman Corporation. Brown-Forman are still in ownership and also own the Jack Daniel's distillery in the neighbouring state of Tennessee. They mothballed (the process where a distillery is taken out of service but remains intact) and sold the distillery in 1968. However, they decided to start producing premium small batch bourbons and re-purchased the Labont & Graham distillery, which they saw as ideal for the purpose. This was in 1993 and following a complete refurbishment, including new stills made in Rothes in Scotland, production was restarted. Woodford Reserve, which is named after the Woodford County where the distillery is located, was first introduced in 1996 and we are now on the release of batch number 59.

Our tasting notes
The colour of Woodford Reserve is a rich amber orange and the nose is intense, sweet and spicy. There is an immediate hit of vanilla and oak and it feels very woody (think of new oak furniture or wood shavings). Underneath this, other elements reveal themselves - coconut, honey, maple syrup, orange oil and warm spices (imagine ginger and nutmeg). On the palate, a similar thing happens - your mouth is hit with a ton of oak and vanilla before other notes begin to come through. The vanilla has a creaminess to it and the combination of the coconut, orange oil and warm spices (especially the ginger) from the nose in addition to some brown sugar and slightly bitter cereal grains, give the whiskey depth and complexity. The initial oak grips your palate and hangs on right the way through to the long finish. The finish becomes increasingly dry, tannic and spicy - imagine a combination of heavy oak, cereals (especially the more bitter rye grains), ginger, nutmeg and a touch of hot chilli.

What's the verdict?
Woodford Reserve is one of the increasingly popular bourbons within the cocktail world. It is easy to see why as its exaggerated flavours and deep complexity would manage to stand out when mixed with any manner of other things. When taken neat, this is a lovely bourbon for those same reasons but it may be a little too rich, woody or spicy for some palates, especially the uninitiated bourbon drinker. However, that should not stop you trying this excellent whisky. A bottle should cost between £25-30 from specialist retailers and some larger supermarkets.
posted by Matt C at 12:14 PM

What really makes Woodford different is that they use Pot Stills.. the only major bourbon maker to do that. (all others use Coffey stills.) Their first still is unique in that it takes the entire mash (solids too), just like a coffey still. That causes it to wear out quicker. As for their ingredients, no secret there:
72% Corn, 18% Rye, 10% Malted Barley. Fermented for 5-6 days. Comes out of still #3 at 158 proof. They put it in the barrel at 110 proof. The mash bill also calls for 6% sour mash (that is.. solids from a previously distilled batch.) The water for the mash is typical of Kentucky in that it's limestone. The limestone is why so many distilleries are in Kentucky and Tennessee.
I've been to Woodford Reserve Bourbon Academy 3 times. It's a great time.

hey, no kidding!! I tried this one in San Francisco too!!!! But I brought back another bottle :)) you will see it soon!!