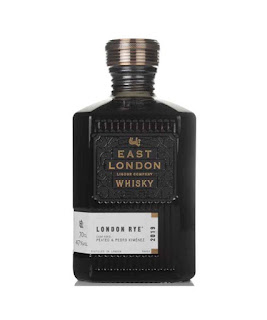 This whisky is the most recent rye release from the East London Liquor Company. The distillery is located in historic industrial buildings on Bow Wharf in London and features custom designed stills that are a combination between copper pot and column, crafted by Arnold Holstein. The site was formerly a glue factory in the UK capital's famous East End. Through the bespoke stills they produce a variety of spirits including three different styles of London Dry gin, a 100% British Wheat vodka, single malt whisky and this rye.

The East London Liquor Company was founded in 2014 and began with gin and vodka production. Whisky was started later and the distillery was expanded in 2017 to deal with increased demand.  The distillery does not chill-filter any of its products and is experimental with its maturation - they use traditional ex-bourbon and ex-sherry casks but also more unorthadox origins and size of casks such as French oak, chestnut and English oak along with quarter or octave capacity.

"The great thing about producing our whisky in London is that we have a clean slate to be creative. We have put a lot of attention and care into our London Rye – from the char levels of the barrels, to the ABV of the final product; perfect to drink neat the minute you crack open the bottle."
Andy Mooney - Master Distiller at ELLC.


The London Rye will be released in small batches and the first batch came out in late 2018. This 2019 batch features a mash bill of 42% rye and 58% pale malt. The resulting spirit was been matured in a combination of ex-peated single malt casks and ex-Pedro Ximenez sherry barrels. It was released at 47% ABV and priced at £79/$95 US per bottle. Sadly it has now sold out but further editions are expected.

Out tasting notes
The colour is deep amber and the nose has an immediate peppery quality. This is supported by heady aromas of raisins, treacle, red apple skins and something reminiscent of red vermouth. Underneath are further hints of milk chocolate, baking spices, antiseptic bandage and a whiff of something bitter and herbal.

On the palate this whisky has a lovely initial juiciness - think of plump raisins and crisp apples combined with red fruits. This evolves in to a note reminiscent of strawberry jam and blackcurrant cordial. Earthy spices and bitter peat smoke entwine themselves around this fruity quality to create an intriguing combination. Bitter green herbal notes develop also and this gives the whisky a digestif-like feel. Further complexity is added by hints of warming wood spice and fresh ginger along with some red chilli, dried tobacco leaf and a decent pinch of white pepper.

The finish is long and lingering. The juicy fruit notes hold for a decent time before beginning to fade and give in to the more bitter and spicy qualities. By the end you are left with a distinct warmth alongside a vegetal and damp earthiness.

What's the verdict?
This London Rye is vibrant and juicy with plenty going on. The unorthadox combination of casks with the expressive spirit creates something that is multi-layered and somehow works together. That said, the flavour profile in particular we found quite challenging. Challenging, quirky and slightly odd to be honest.

But with time this whisky grew on us and it really shows the lack of conventional boundaries that newer distilleries like the East London Liquor Company are working with. This helps to create such unusual flavours and push products in different directions. Very interesting.