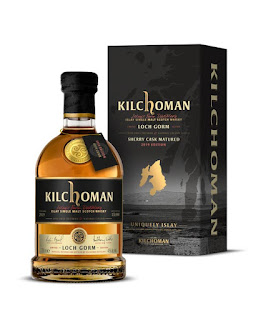 Kilchoman is one of Scotland's smallest single malt distilleries and is named after the local church parish. It is located on the remote west coast of the famous whisky island of Islay. The first spirit was only produced in June 2005 and the first single malt was released in November 2009. Kilchoman is independently owned and has a production capacity of just over 100,000 litres a year, although this is increasing annually.

The Loch Gorm 2019 Edition is released at 46% ABV and is non chill-filtered and of natural colour. It will be available worldwide via selected specialist whisky retailers. The price was not revealed in the press release but is rumoured to be around the £70-75 mark.

Our tasting notes
The colour is deep golden yellow and the nose is immediately peaty with a slight acrid and medicinal edge. Underneath is a distinct sweet maltiness and rich aromas of dried fruits (especially raisins and sultanas) and caramel, followed by some herbal notes of green chilli, wet moss and dried grass.

On the palate this whisky has an immediate kick of smoke, which has this acrid and medicinal edge as on the nose (imagine some coal tar soap, surgical bandages and dried seaweed). It is earthy and hot with a hint of bonfire embers and green chillies to it. The combinations create an initial tingly dryness, which is only softened and balanced once some sweeter and fruitier notes begin to make their presence felt. These come in the form of hard caramel sweets, butterscotch, golden syrup and honey plus a collection of dried fruit and nut characteristics (think of raisins, sultanas, apple, candied orange peel and walnuts). Robust malted cereals add depth and a distinct bittersweet edge.

The finish is extremely long and warming. The power of the peat smoke lingers most alongside the heavy malted barley notes. The sweeter and fruitier notes fade slowly with some delicious golden syrup hanging on longest. Once that is gone, the finish is dry and earthy with a hint of bitterness.

What's the verdict?
Another delicious offering from the guys at Kilchoman and one that offers a bigger and more robust peaty offering than most of their releases. The combination of this heavier peat profile with the ex-sherry casks helps to maintain a good balance and stops one overpowering the other.

It seems that Kilchoman continues to go from strength to strength, especially as they now have some older malts at their disposal. This Loch Gorm 2019 Edition is splendid.

i am Nadim and i want to thank Dr idahosa for bringing back my ex boyfriend, we broke up for more than 8 month and he told me that he will never want to see me in his life again. i love him so much to the extend that i could not think of dating any man again, i was confused and depress due to the love i had for him.i did everything i could do to have him come back to me but all went in vain. so i decided to contact a spell caster, i did not believe in spell casting i just want to try it may be it would work out for me. i contacted Dr idahosa for help,and he told me that he have to cast a love spell on him, i told him to do it. after 5 days my boyfriend called me and started to apologize for leaving me and also he told me that he still love me. i was very happy and i thank Dr idahosa for helping get back my ex back to my hands. his spell is the greatest of all over the world, it was the love spell he cast on my ex that make him come back to me. all you ladies who want back their ex back i want you to contact Dr idahosa for the return of your ex boyfriend and also your ex girlfriend he can also cast any kind of spell you want him to cast for you. his contact email is dridahosasolutioncenter@gmail.com or Whatsapp number+2348134261542, just try him and their will be a solution to your problems.

i already gave up on ever getting cured of HSV2 because i have try many treatment none of them work out for me i have go to different hospital they always tell me same thing there is no cure for herpes when i came across a post about Dr ohunyom, in the net from a lady called Angela i contacted him and he reassured me with him herbal medicine which i took according to the way he instructed, that how i was cured. I doubted at first because i have been to a whole lot of reputable doctors, tried a lot of medicines but none was able to cure me. so i decided to listen to him and he commenced treatment, and under two weeks i was totally fee from #Herpes. i want to say a very big thank you to DR ohunyom for what he has done in my life. feel free to leave him a message on email drohunyom@gmail.com and also WhatsApp him +2349060579973..
He can still be able to help you with this herbs medicine:
1...ALS CURE/DIABETES CURE/EPILESY/HPV CURE/LUPUS/HEPATITIS/CANCER/GOUT

Hello everyone! I don't just know the reason why some people is finding it difficult to believe that there is a cure for herpes, I have been suffering from herpes since six years with my wife but today I am happy that I have been cured from it with the herbal medicine made by Dr Ohunyom the great healer, I was browsing the internet searching for help when I came across a testimony shared by someone on how Dr Ohunyom cure Him from Herpes Virus. I quickly contacted him to get the cure and today me and my wife are now totally free from the virus, I am so much happy today that we have someone like this great healer out there,please sir keep your good work cause there are many out there who is in need of your healing medicine. Contact him now on his email: drohunyom@gmail.com or you can text him on WhatsApp : +2349060579973 and he also has the herbal cure for the Following DISEASES, eczema,urethra wart,chronic problems.Herpes, Cancer, Als,Hepatitis, Diabetes, HPV,Infections,ulcer ETC

This has really worked and I am proud to testify of it. I saw a post on how a lady got her man back by Dr Jato. He helped her to get her Ex Husband back. My Husband divorce me 2 years ago to live with another woman and i have try to let go of him but i could not, so i try to do many things to get him back and he refuse to come back to me. I visit a forum one day for tips to get him back and there is saw a lady testifying of how Dr Jato helped he to get her man back after he was tie down with a spell by another woman and Dr Jato was the one that help her. Although I never believed in spiritual work I reluctantly tried him because I was desperate and i contact him and explain my problems to him, to my greatest surprise Dr Jato helped me to bring back my man after 2 days and now my relationship is now perfect just as he promised. Getting your ex back permanently spell does not only bring back someone you love but it will also re-ignite your lovers feelings for you to be as happy with that person. My man now treats me like a queen and always say he love me all the time. If you are passing through difficulties in your relationship Email him for urgent help.E-mail: jatolovespell@gmail.com or WhatsApp/Call him at +2348140033827
thank you Dr Jato for the help..