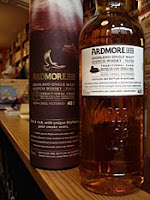 Ardmore is a Highland distillery near Aberdeen and is unusual as they use peated malt for their core range of whisky. Other highland and Speyside distilleries do this, but only for limited releases or batches to supplement their regular range (most notably Benriach, Benromach and Tomintoul). The phenol level is around 14ppm, making the final spirit much less smoky than whiskies from Islay or some of the other islands. The distillery is owned by Jim Beam Global and most of the 5 million litres of whisky produced each year goes to their flagship blend, Teacher's Highland Cream (one of the biggest selling blended whiskies in the UK). This 'Traditional Cask' was originally for export and duty free only but has just been released to UK retailers with the name deriving from the fact that the whisky is matured for some part in small casks that are a quarter of the size of a regular cask. . Other bottlings are few and far between, mostly coming from independent companies.

On the nose, this smells pretty good with the smokiness being quite meaty (like smoke from a barbeque) and sweet (it reminded me of fresh fruit, pears especially). On the palate, there is a similar initial sweetness and maltiness however this is quickly engulfed by the smoke. This feels thin in the mouth and the finish is short, both of which are quite different for a smoky whisky. Overall I was a bit disappointed as it was pretty one dimensional. It was all smoke and not much else. At £25-£30, it is up against some of the smoky big boys (Ardbeg 10 years old, Laphroaig 10 and Bowmore 12) but would be a decent choice if you were looking for something a bit more unusual.
posted by Matt C at 12:13 PM

Peat, wood (are those bourbon oaks ?) and pears on the nose.
Light on a the palate, I get a sweetness/peatness combo that's quite nive.
A medium finish, mostly peat but pears come up again.

At that price, hard to find a better single malt.
Very nice stuff.

one concern though about the fact that the appearance is cloudy Is this correct?