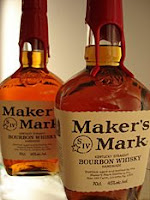 Maker's Mark is one of the best known distilleries in America. It is the most southernly in the biggest whisky producing state of Kentucky and is located in Loretto, Marion County. Maker's Mark is a large distillery with a capacity of 8 million litres per year (this dwarfs most of the distilleries elsewhere in the world) and is one of the oldest in America, having been founded in 1805. The distillery is famous for its imposing black and red buildings, especially some of its warehouses which are up to six storeys high. The original name of Star Hill Farm Distillery was changed to Maker's Mark in the 1950s when new owner Bill Samuels decided to revamp the whole organisation. He changed the recipe and the combination of grains used as he wanted to create a premium bourbon rather than the economic ones that were flooding the market following the end of the Prohibition period. It was a risk but the popularity grew to the point where the distillery was awarded the 'Kentucky Icon' label in 1980 and now it is one of the best selling American whiskies across the world. It is currently owned by multi national drinks firm, Allied Domecq.

The colour is a deep amber and the nose is rich and complex. It has a good, rich balance of sweet vanilla, fruitiness (think of dried fruits like sultanas and dried candied peel, especially orange) and cereals. On the palate, it feels slightly lighter than the nose suggests but your mouth still explodes with intense flavours. It is buttery with elements of honey, nuts (think of coconut), caramel, sweet cereal grains, oakiness and tons of that dried fruit and vanilla. There is just a hint of some spiciness (imagine cinnamon or nutmeg). The finish is soft, rounded and long with the caramel and vanilla particularly prominent and the spiciness also increasing. This is an extremely good and well structured dram that gives an intense combination of flavours and is very easy drinking. An excellent example of a bourbon whiskey (although Maker's Mark are the only American distillery not to use the 'e' in the word 'whiskey' in honour of Bill Samuels' Scottish heritage) and good value at £25-30 a bottle.
posted by Matt C at 10:33 AM