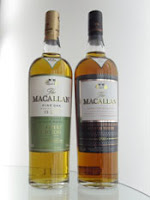 These whiskies are two exciting new releases from Macallan - one of the most famous names in the world of whisky. The distillery and brand name are both well known and the single malt range is consistently in third place for world sales, behind only Glenfiddich and Glenlivet. Here they have produced two limited edition whiskies in different styles – the Director’s Edition has been matured in ex-sherry casks in the traditional Macallan vein and the Masters' Edition has been matured in a combination of ex-sherry and ex-bourbon casks. This carries the Fine Oak label, which indicates this mixed maturation.

The whiskies have been constructed using different ages of single malt to create the desired flavour profiles and characteristics. Both are bottled at 40% ABV and both are being sold exclusively by The Whisky Shop – the UK’s largest specialist whisky chain. The Director’s Edition is selling for £39.99 and the Masters' Edition for £33.99. They can be purchased in any of The Whisky Shop’s 17 stores in the UK or via www.whiskyshop.com. The news is that these limited whiskies are already selling fast and they only hit the shelves early last week.

The distillery is located close to the village of Craigellachie in the Speyside whisky region of Scotland and sits within a large estate, which overlooks the mighty River Spey. It was founded in 1824 by Alexander Reid and was originally called Elchies, after estate in which it is located. Other than the distillery, the estate is known for Elchies House and this can be found on the current Macallan packaging. The name of the distillery was changed to Macallan in 1892, following a change of ownership. The current owners are The Edrington Group, who have recently expanded the distillery to have a massive annual production capacity of 8.75 million litres. 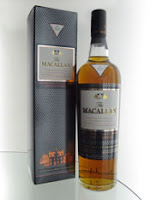 The colour is a rich golden amber and the nose has a lovely sweetness to it.  The key aromas are caramel, vanilla and crumbly brown sugar.  These are backed up by plenty of dark dried fruits (think of raisins, sultanas and a hint of candied orange peel), soft barley and oaky wood spices (imagine cinnamon and nutmeg).  On the palate, this is again initially sweet and full of notes such as caramel, toffee, vanilla and the dried fruits from the nose.  It feels soft and gentle in your mouth, before some wood spice (cinnamon and nutmeg again) and some tangy orange zest give it a lift and a bit more depth.  An underlying note of bittersweet cereal grains has the same effect.  The finish is warming and rich, again with initial caramel and dried fruit.  The wood spices (add in a hint of fiery ginger now) and bittersweet cereals gives the lingering finish a drier edge right at the end. 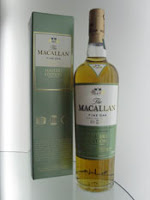 The colour of this whisky is golden yellow with a hint of amber and the nose is a combination between sweeter, richer aromas and lighter, fresher ones.  The sweeter aromas included distinct notes of sultana and malted barley, along with honey, vanilla and coconut.  The fresher aromas predominantly include crisp green pears and apples, plus a hint of lemon zest.  On the palate, this is initially slightly tangy with the pear, apple and lemon at the fore front.  It is not long before the sweeter notes kick in with plenty of honey, sultana and malted barley in evidence.  Right at the end, some light wood spices (think of cinnamon and nutmeg) and note resembling wafer biscuits appear and add soem depth and complexity.  The finish is soft with pleasant sultana sweetness, which combines with the green fruit and spices to give a tangier and spicier than expected ending.

What’s the verdict?
Macallan have produced two good whiskies for these exclusive bottlings for The Whisky Shop chain. They both fit safely into the distillery's regular range and flavour profile - the Director's Edition being in their traditional sherry cask matured, rich and sweet style and the Masters' Edition being in their lighter, fresher Fine Oak style.  As a result, between the two they cover a wider range of personal taste and therefore have a wider appeal.  Both are lovely, but in different ways, and it is hard to pick a favourite - we guess it depends what mood you are in!