This latest single malt from the famous distillery in Speyside is one of the most mysterious new releases of the year to date. It is mysterious because very little is known about it and details will be slowly revealed over the coming weeks, such as age and cask maturation type. As a result, The Glenlivet Alpha is packaged in a black bottle and carries no tasting notes or other details. Essentially, The Glenlivet are asking consumers to take a 'step into the unknown' and be part of an innovative and unique journey.

The Glenlivet is one of the most famous whisky names and brands in the world. The distillery is located in the Speyside region, close to the town of Ballindalloch in the scenic Livet Glen from which it takes its name. The Glenlivet was founded in 1824 by George Smith (his signature still appears on the labels and packaging) and it was the first distillery in the Speyside region to be granted a distilling license under the Parliamentary Excise Act, which was brought in one year earlier.

The Glenlivet is one of Scotland's largest distilleries with an annual production of 10 million litres and is currently owned by Pernod Ricard, who took control in 2001.  Their influence has seen The Glenlivet become one of the best selling single malts in the world - it is second for overall world sales (behind Glenfiddich) with over six million bottles sold each year. It is third in the UK (behind Glenfiddich and Glenmorangie) and is the best selling single malt in the USA, where it has been number one since the 1970s. 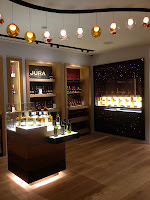 There are to be just 3,350 bottles of The Glenlivet Alpha and it will retail at £99.99 ($120 USD) a bottle. It is currently available to order through various specialist whisky retailers in selected markets around the world.  In addition, to help unlock the mystery of Alpha there will be a series of 'sensory challenges' operating on a special Glenlivet Facebook page.  Below is the first of the videos to whet the appetite.  We were invited to the official launch of Alpha, which was held at The Whisky Shop's flagship store in central London (pictured, left).


Our tasting notes
The colour is a pale golden yellow and has a lovely vibrancy and freshness to it, along with a slight prickly heat.  Despite this it feels delicate and the aromas begin to appear and marry together - green apple, custard powder (these first two are reminiscent of an apple danish pastry when combined), vanilla, dried coconut and lemon curd. There are also hints of toffee, cinnamon and damp cardboard.  It is a very promising start.

On the palate this is again light, delicate, fresh and vibrant.  There are initial notes of freshly sawn oak (think of the shavings) and a tangy lemon-like citrus quality, which is reminiscent of lemon zest or curd).  These notes remain throughout but are soon joined by other woody and spicy notes, especially dried coconut, cinnamon bark and nutmeg.  These have a drying effect.  There is not much obvious sweetness but it is there, with lovely notes of vanilla, honey and soft malty barley sugar coming through.  Later there are hints of icing sugar and dried apple that appear, along with an even later note of over ripe bananas.  The lemony element returns to prominence right at the close.

The finish is on the short side but packs plenty in to its limited time - the sweeter notes (malty barley sugars and vanilla are particularly evident) fade to leave lasting woody and spicy notes (especially freshly sawn oak and cinnamon bark), along with a final hit of lemon juice.  The result is wonderfully dry, woody and mouthwatering.  Also, make sure that you return to the empty glass after about 10 minutes and you will smell some lovely malty and toffee-like notes.

What's the verdict?
This is a classy whisky and one that exhibits some wonderful aromas on the nose and flavours in the mouth.  Despite the higher ABV strength, it is easy drinking and its drying and mouthwatering nature makes you want to reach for another sip.  When sampled, it reminded us very strongly of the recently released Balvenie 12 years old Single Barrel, but that is as near as we will get to speculating as to the age, cask type etc.

This release has attracted plenty of criticism, especially amongst the online whisky community, for its lack of details with some feeling that it is taking things too far or being a potential rip off.  We understand these points to a degree, as consumers are being asked to essentially take a 'stab in the dark' and pay £100 to do so. However, the consumers do not appear to be agreeing with these views as many retailers have either sold out of their allocation, or are very close to selling out.

We like the idea of removing any pre-conceptions about the whisky and guess that a 'different approach' will always attract negatively from some quarters.  While some have openly criticised the marketing/PR hype, we take our hats off to Pernod for an innovative and alternative style of campaign on what is their flagship single malt brand.  Having now sampled Alpha, we cannot wait to find out what it is ... however, in the end it really doesn't matter what it is because we like and enjoy drinking it.  Ultimately, that may be the point being raised ...

posted by Whisky For Everyone at 9:25 PM

$120 US for an unlisted aged whisky? Spare me. I am sure there some idiots willing to spend their hard earned money on this. Good luck to them.

With no age statement on the label this one reminds me on a Dalmore King Alexander II or Glenmorangie Signet.

But this one lacks the hefty Sherrycasks. The extreme price tag is not explainable.