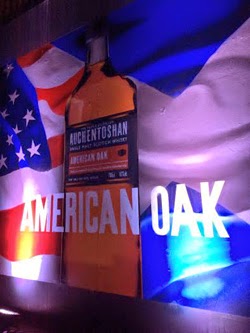 The American Oak is the new entry level whisky in the Auchentoshan single malt range.  The whisky has been created to appeal to new whisky drinkers and has been solely matured in first fill American oak casks, which have previously held bourbon.  It will replace the current Classic expression.  The American Oak was launched in London in late October and the event featured new cocktails and murals being painted live by street artists, such as the one above.

Auchentoshan (pronounced ock-en-tosh-an) is the nearest distillery to Glasgow. It is located in the Lowlands region and sits to the north west of the city near Clydebank. It was officially founded in 1823, although records shown a distillery called Duntocher operating nearby in the early 1800s. Auchentoshan translates as ‘corner of the field’ from the local form of Gaelic and is currently owned by Morrison Bowmore, which is part of the larger Beam Suntory company. It has a current production of 1.75 million litres per year.

Auchentoshan is unique amongst Scottish whisky distilleries as they triple distil every drop of their spirit. Elsewhere in Scotland the common practice is to distil twice, whereas triple distillation is more commonly associated with Irish whiskies. Triple distillation produces a new make spirit that is lighter and more delicate in flavour and higher in alcohol - Auchentoshan has the highest strength of new make in Scotland at 81.5% ABV.

The American Oak is bottled at 40% ABV and is available now from selected supermarkets and specialist retailers. A bottle should cost around £30.

Our tasting notes
The colour is golden yellow and the nose is full of sweet and grassy aromas.  The sweetness is driven by aromas of honey, vanilla and brown sugar.  The grassy fragrance gives a freshness and is reminiscent of hay and straw.  Underneath are further aromas of nutmeg, cinnamon, coconut and a hint of lemon zest.

On the palate, the whisky feels light with the zesty lemon note giving an initial freshness and tang.  Then the sweetness arrives with plenty of golden syrup and vanilla, plus a hint of dried apricots.  This is backed up by a lovely malted cereal note that develops in to a warming gingerbread characteristic.  These are joined by further notes of cinnamon and dried coconut, and this adds to an increasing feeling of dryness that begins to take hold.  This feeling is heightened by the late appearance of the dried grassy elements from the nose as the sweeter notes continue to fade.

The finish is not overly long but is very pleasant and dry with the warming ginger and cinnamon spices coming further to the fore.  The sugary and malty sweetness remains to give balance.  In fact, the fading maltiness does a last minute u-turn and returns to finish everything off.

What's the verdict?
Auchentoshan have done well with this new release and we believe that it should prove successful at what they want it to achieve.  It is quite basic and light but full of simple, easy to distinguish aromas and flavours.  This should make it accessible for the beginners market that they are aiming at.  Having said that, we enjoyed it very much so it has enough to please more experienced whisky drinkers.