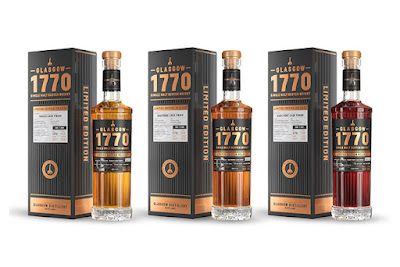 The Glasgow Distillery Co. have announced the release of three limited edition single malts - the 1770 Cask Finishes. The collection is designed to show off how the distillery's three spirit types mature in different casks. The classic unpeated spirit has been paired with ex-Ruby Port casks from Portugal and the peated with ex-Sauternes dessert wine barrels from France. The triple distilled has been finished in ex-Tokaji wine casks from Hungary. All are finished for a short period in each cask, are bottled at cask strength and are limited in number.The Glasgow Distillery Co. began production in February 2015 and in doing so became the first distillery to produce single malt whisky in Glasgow in the modern era. The brand is named after the Dundashill distillery, which was Glasgow's first ever whisky distillery and was founded in 1770. The Glasgow Distillery Co. was founded by Mike Hayward, Liam Hughes and Ian McDougall, and is located in Hillington to the west of the city.
The distillery has an annual capacity of 270,000 litres and initial reaction to the single malts has already led to an expansion being planned. The company has three expressions in their single malt core range - the 1770 Original, 1770 Peated and 1770 Triple Distilled. They also own Makar gin, which is produced at the distillery in a dedicated gin still, and the rare aged single malt label Prometheus.

"Something that sets us apart from most other distilleries is that we make three very distinct styles of single malt whisky at the Glasgow Distillery - unpeated, peated and triple distilled. I am really proud to be able to offer these three releases as an insight into our innovation, experimentation and quality."
Liam Hughes / Founder of the Glasgow Distillery.

Glasgow 1770 Ruby Port Cask Finish
The colour is a deep reddish amber and the nose is rich and fruity. Dark dried fruit (think of raisins and sultanas especially) and caramel aromas rise from the glass first. They are joined by milk chocolate (or is it mocha?) along with hints of blackberry, cinnamon and vanilla essence.
On the palate this whisky is big and bold. Initial notes of milk chocolate and caramel are quickly joined by juicy dark fruits (raisins and sultanas again, plus some cranberry, date and fig). Red apples and butterscotch are also evident, along with some golden syrup and increasingly influential spices (imagine cinnamon, clove and a hint of liquorice root). Background hints of strawberry jam and black treacle add to the depth. Later, the whisky turns more savoury with a drying woody character coming through alongside something vegetal and a little bitter.
Glasgow 1770 Peated Sauternes Cask Finish
The colour is golden yellow and the nose is earthy and smoky. Powerful peat aromas dominate with an ashy, ember-like character coming through. This develops into a more damp and mossy feel. Other aromas struggle to come through with honey, vanilla and icing sugar the ones to successfully do so.
On the palate this whisky is initially hot and peppery. As this subsides the peaty and smoky notes are the first to appear. These continue the ashy, ember-like feel found on the nose and evolves a hint of charcoal and damp earthiness. Malted cereals also come through along with notes of crisp green apple, sultanas and white chocolate. A pinch of cinnamon and icing sugar are also detected. However, it is again the peat smoke that dominates and this becomes slightly mineralic towards the finish. A final background floral note adds a nice twist and hints towards rose petals.
Glasgow 1770 Triple Distilled Tokaji Cask Finish
The colour is pale golden yellow and the nose is fresh, vibrant and zesty. Sweet aromas of honey, vanilla and white chocolate dominate alongside a distinct whiff of lemon and grapefruit zest. Underneath are further aromas of green apple, sultana and developing baking spice.
On the palate this whisky continues with the fresh and vibrant nature. Vanilla toffee, brown sugar and heather honey notes hit first and are followed by lemon cheesecake, custard powder and bitter grapefruit peel. The intriguing mix is followed by some white chocolate and cocoa, along with crisp green apples and boiled peardrop sweets. Later on, a distinct fresh oak characteristic develops as do warming baking spices. The combination adds a little dryness to proceedings and this continues through to the finish. Cinnamon, clove and hints of all-spice and mace come through.
What's the verdict?
The Cask Finishes are an interesting collection from the Glasgow distillery. It shows the versatility of the spirits that they are producing there and pushes them in three different directions through the choice of cask type and finish.
What is our favourite? Well, that is easy - the Triple Distilled Tokaji Cask Finish. Ex-Tokaji casks can be a little hit or miss from experience but this one nails it. The combination of delicate and fruity triple distilled spirit and the sweet wine cask is superb and easily the most balanced.
The Ruby Port Cask Finish is nice and rich, although becomes too savoury towards the end. The Peated Sauternes Cask Finish sees the peat smoke dominate, almost to the detriment of everything else, and is a little fiery. That said, we like the experimentation and look forward to what 2022 holds for them.
posted by Matt C at 5:11 PM

Hi There,
Thank you for sharing the knowledgeable blog with us I hope that you will post many more blog with us:-
Teremana Reposado Exclusive to VIP Bottles, get your hands on a bottle* of Teremana Reposado Tequila from Dwayne ‘The Rock’ Johnson. Also Launched recently in the US, VIP Bottles is the exclusive destination to purchase the hottest tequila brand around Tequila.
Email:info@bourbonliquorstores.com
Click here for more information:- more info