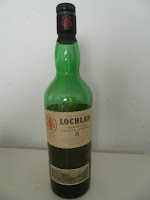 About a year ago a rather mysterious blended whisky appeared on the shelf of my local Tesco. Looking rather dapper for a sub £20 bottle of whisky, the design appealed to my more shallow instincts and so a couple of months ago I decided to pick up a bottle on one of my shopping trips. Lochlan is an 8 year old blend. It says on the back label that is consists of malt and grain whiskies that have been carefully selected by Richard Paterson.

Richard Paterson is the Master Blender for Whyte and Mackay, who’s whiskies include Dalmore, Jura and Fettercairn single malts as well as the Whyte and Mackay range of blended whiskies. That’s about all I’ve been able to find out. What the blend actually consists of is a mystery but this is the case for many blended whiskies as companies like to keep their cards close to their chests as to how exactly their blends are created. We can guess that there’s possibly a fair bit of Dalmore, Jura and Fettercairn in the blend, plus a bit of Invergordon grain (Whyte and Mackay also own Invergordon grain distillery up in the Northern highlands). No idea what else the blend could consist of.

As far as I’m aware, this whisky is exclusive to Tesco. Costs around £18 but can be found for around £15 occasionally when they have a deal on.

Our Tasting Notes
The nose starts quite sweet like strawberry bonbons and icing sugar. Gets richer but still sweet, with caramel, rum and raisin ice cream. A grainy, gristyness also starts to come through after a while as well as a cardboard like smell. With water it loses its richness a little, gets a little shy, with hints of vanilla and orange water. This is not aggresive on the nose at all, certainly blend-like. It's nothing very complex but very pleasant.

Overall, on the palate  the whisky feels a little thin. Nonetheless, it's still manages to be quite flavourful as there is a big hit of raisins, bitter caramel and toffee. Reminds me a little of Dalmore but it could just be the power of suggestion workng here. There’s also something odd that reminds me of the taste of the glue you get on envelopes along side something quite cereal like. This is closely followed by a fiery attack of ginger that fades away as quickly as it appears. With water the palate gets a little sweeter, little less bitter caramel flavour. Tastes a little of dark chocolate orange. Overall it's quite basic on the palate but what's there is very nice.

The finish is quite raisiny and grassy which almost reminds me a bit of Rum Agricole. Very faint but long lasting. There's very faint whisp of mint  and chocolate as well.

What’s the verdict?
This is pretty good for under £20. It’s not anything particularly complex or exciting but you could do a lot worse for this price. Quite flavourful, not spirity or too fiery. It seems Whyte and Mackay have tried to make the best possible blended whisky at this price point so they should be commended for this as it’s not often the case you get the same impression when trying some of the other similarly priced blends out there.

Thanks for the review of Lochlan Whiskey. I'm looking to buy a low price whiskey for a gift. This one is on the radar now. Thanks..

The Old Funker enjoys a Spayside single malt but the price at Tesco said give it a try. It's a surprise and the for the price it is a summer delight and I shall pick up a bottle again.

Thanks for the review of Lochlan Whiskey. I will try it. Always looking for value, with acceptable taste. ;-)
Frugal, not tight :-)£15.00 @ Tesco ATM

Thank you for your review. There is very little information online about this certainly mysterious whisky. I recently tried it, and I think it is a good buy for a 15£ blended whisky. Not extremely complex (as expected), but good enough for sipping on a Friday evening. It smells sweeter than it tastes, in my opinion. There are certainly some dry fruit notes in there and a bit of sugar. Would you dare to post a review on Youtube?

A great find and is now our regular buy. A smooth delicious whisky reasonably priced.

A friend of mine got me a bottle for my birthday. I was very pleasantly surprised. Although a little thin it was bursting with fresh raisin and chocolate notes. With ice the notes were not diminished,but enhanced, almost on a par with Aberlour. Would recommend this strongly.o