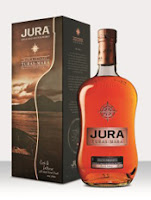 The Jura Turas-Mara is a new expression from the increasingly popular island distillery of Jura, which is exclusive to the travel retail market. The name of the expression translates literally from Gaelic as 'long journey' and links to the travelers who will be able to purchase it in the airports.  It also refers to the many islanders from Jura who were forced to emigrate great distances, particularly to Canada and the USA, during the notoriuos Highland Clearances of the 18th and 19th centuries.

The Jura distillery is located on the isle of Jura, which lies off the west coast of Scotland. The distillery was founded in 1810 by Archibald Campbell and was originally called the Small Isles distillery after the numerous small islands located in Craighouse Bay, which the distillery overlooks. It was closed for a long period between 1901 and 1960, at which point it was rebuilt and re-named as Jura by Charles Mackinlay & Co. Production restarted in 1963 and has been operating ever since.  The distillery has an annual production capacity of two million litres and is currently owned by Whyte & Mackay.

The Turas-Mara is bottled at 42% ABV and presented in Jura's new packaging, which we reported on in Inbox a few weeks ago.  It has been matured in a combination of casks sourced from France, Portugal, Spain and the USA.  Each bottle has a compass emblem on the front, which is repeated on the packaging along with a poem (called An Ode To My Homeland) by 19th century Jura resident Jessie Scott. The Turas-Mara is available in selected travel retail markets and should cost £40/€50 a bottle.

Our tasting notes
The colour is golden yellow with a hint of amber and the nose is initially quite closed revealing a pleasant brown sugar/toffee note.  After a few sniffs and time in the glass the whisky begins to open up - a lovely combination of aromas develop including fresh green apple, honey, vanilla, bitter orange and hints of cinnamon, nutmeg and earthy ginger.

On the palate, it is the bitter orange note which hits first and this is quickly joined by some softer malted cereals.  This orange note gives a lovely tangy feel and continues through to the finish.  It is accentuated by other notes of brown sugar, caramelised nuts, vanilla, golden syrup and dried apple.  Further dried fruits are detected including raisins, sultanas and candied lemon peel.  There are late notes of milk chocolate and maraschino cherries, along with hints of warming wood spices which seem to hold on to the taste buds - think of cinnamon, baking all-spice and ginger especially.  The combination is lovely.

The finish is quite long and the bitter orange element is never far away.  There is a distinct fruitiness which slowly fades and is reminiscent of sultanas and dried cherries especially.  There is also plenty of sugary toffee, along with a pinch of baking spice and ginger powder.

What's the verdict?
The Turas-Mara is a very pleasant whisky and one that is enjoyable to drink.  It is quite basic and lacks a little depth, but this is not a negative point by any means.  What it does, it does well and is placed at a decent price point too.

If you are passing through an airport and want an easy-drinking expressive whisky, then think about picking the Turas-Mara up. It is one of the best of the recent younger expressions from Jura and one that shows a clear positive development from some of the previous releases.

Hi
Yesterday i buy Turas Mara at the Malpensa Airpost at the Milano....Now I have taste it (three drums with few spoons water per drum)...I really enjoy it... :-)