AnCnoc - Your day is approaching
As we reported a few weeks ago, the Highland single malt brand of AnCnoc has just launched the latest edition in its Peter Arkle series.  The third bottling is entitled Bricks and is available now.  To mark this continued collaboration with the famous illustrator a new competition has been launched.

The #youranCnoc competition will take place on June 17 when fans will be asked to tweet a photo of their 'perfect anCnoc moment' on that day. Ten entries will be selected by Peter Arkle - these will then be hand-drawn, transferred onto individual bottles of anCnoc and sent to the winners. Additionally, one lucky winner will be taken to New York to meet Peter and see his Manhattan studio.

Entries can be posted between 00:00 GMT on Monday 17 June and 09:00 on Tuesday 18 June, and should be posted to @ancnoc_whisky on Twitter using the hashtag #youranCnoc.  Good luck with your snapping ...

The Glenlivet have launched a special Facebook app to help fans of the single malt brand show their appreciation for their dads over this coming Father's Day weekend.  The app allows users to create a personalised cover picture which combines their profile picture with an uploaded image of their father The example above is The Glenlivet Distillery Manager Alan Winchester's personal cover picture.  This can then be share with friends and family on Facebook.  To try the app and create your own cover picture - visit www.facebook.com/theglenlivet/app_449982555078645. 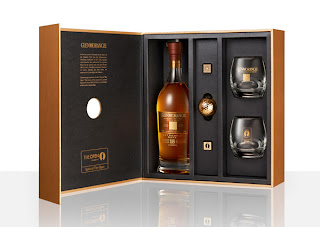 The award winning Highland distillery of Glenmorangie have released a special limited edition gift box to celebrate their continued sponsorship of The Open golf tournament, which takes place at the Muirfield course in Scotland during July. The box contains a bottle of the Glenmorangie 18 years old expression, two crystal tumblers and a golden golf ball.  It has been released in time for Father's Day and is available in department stores and specialist whisky retailers now for a recommended retail price of £99.

Leanne Banks, the Marketing Director for Glenmorangie says, “This luxurious giftpack is a celebration of the partnership between Glenmorangie and The Open. It is the ideal gift, whether for a dad who is a whisky aficionado or a golfer with a taste for single malts."

Southern Comfort - Continue to feel comfortable
The American whisky liqueur brand of Southern Comfort have launched the latest advert in their Whatever's Comfortable series, which has so far helped grow sales of the brand for the first time since 2008.  The advert is named 'Shampoo' and has been created by Wieden + Kennedy New York.  As with the two previous adverts in the series, it champions the concept of being comfortable in what you are doing and how you look ....


posted by Whisky For Everyone at 7:10 PM