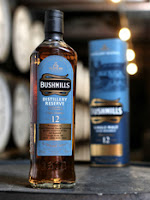 Bushmills - Reaches the Summit
The heads of state attending the G8 Summit in Northern Ireland this week have been presented with a special bottling of single malt to mark the occasion.  The Bushmills distillery, which is the only whisky distillery in Northern Ireland, bottled a special 12 years old single malt and this was presented to the world leaders by British Prime Minister David Cameron.  Each bottle was personalised and signed by the Master Distiller of Bushmills Colum Egan.

Egan said, “We say that getting to know Bushmills whiskey is like building a friendship – the more time you spend with it the more you appreciate its character and personality. The chance to make friends with world leaders only comes along once in a lifetime, so we are all proud that Bushmills has forged new friendships with the heads of some of the most powerful nations on earth.” 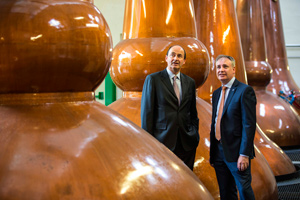 The Glen Keith distillery, which is located in the Speyside town of Keith, has been re-opened.  The distillery has been out of use since closing in 1999 and has undergone major renovation work prior to production beginning last Friday (June 14).  The single malt produced there is earmarked for use in the premium blends of owners Chivas Brothers, such as Chivas Regal and Royal Salute.

The renovation work means that Glen Keith will be producing 50% more malt whisky than previously.  This has been achieved by installing new malt storage facilities, a new mash tun, six additional washbacks and refurbishment the six stills.  A new energy conversion system is also to be used and will make it the most energy efficient distillery in the Chivas Brothers portfolio.

Glen Keith was officially opened by Richard Lochhead (pictured, above right), the Cabinet Secretary for Rural Affairs and Environment in the Government, and Christian Porta, the Chairman and CEO of Chivas Brothers.

Porta (pictured, above left) said, “It is wonderful to see this distillery re-opened and producing spirit once again. The fact that we are re-opening a silent distillery shows just how strong the demand for our luxury Scotch whiskies is. With this new increased distilling capacity, we are well placed to continue to meet this demand and safeguard the future of our award-winning brands for decades to come.” 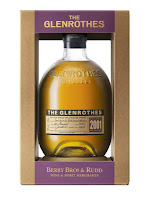 Glenrothes - 2001 : A whisky odyssey
The Speyside distillery of Glenrothes is releasing the latest in their Vintage whisky series, as announced by Berry Brothers & Rudd - the Glenrothes 2001.  The whisky has been constructed by Gordon Motion, the Berry Brothers Malt Master, from a selection of casks.  All were distilled in 2001 and the whisky has been designed to have "soft, stimulating and conversational properties". 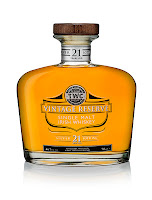 Teeling Whiskey Co -  A good vintage?
Ireland's Teeling Whiskey Company have announced a new range of premium whiskies, and the first release in the series.  The Vintage Reserve Collection will consist of handcrafted small batch releases which will showcase rare and old Irish single malt whiskies, including some of the oldest ever bottled.  The first is the 21 years old Vintage Reserve, with 25 and 30 years old expressions also planned in the range.

The whiskey was distilled in 1991 and has been matured in ex-bourbon casks, before being allowed to marry in ex-Sauternes dessert wine casks. Each cask was hand selected and there are just 5,000 bottles in the final batch.  It will initially only be available in Ireland, including at The Celtic Whiskey Store and in Dublin Airport, before being rolled out to other markets such as Belgium, Canada, France, Germany, New Zealand and the UK.  A bottle will cost £125, €150 or $185 USD.

Jack Teeling, founder of the Teeling Whiskey Company, commented, "We are proud to be able to release some of the oldest ever bottlings of Irish single malt with our Vintage Reserve Collection. These offerings are central to our goal to play the lead role in bringing an independent voice back to the Irish whiskey category and will help drive diversity in the category."


posted by Whisky For Everyone at 9:05 PM

what do you mean Gordon Motion - the same as the one from Edrington group?
can't believe it and I hope it is not the same person at BBR

whereas Glenrothes distillery is still in the hands of the Edrington Group the brand Glenrothes has been sold to Berry Brothers & Rudd in an exchange deal with the Cutty Sark brand in April 2010.

Wellcome to Exkash.com | Cashout E-curreny to Bank Account Directly.
There is no doubt about the fact that the Internet is the best place to sell your perfect money for local cash, the reason being that there are thousands of prospective buyers who are willing to pay any amount to get your Perfect money funds therefore you can capitalize on this to make a significant gain by selling to them. Perfect money is quite scarce for many interested buyers and buying from third parties can cost some fortune, however you can sell at discounted rates to prospective buyers directly from your Perfect money account.
The best place to sell your Perfect money for local cash is exkash.com, this website has a huge market place where interested buyers can easily locate you and then you can set your own prices and negotiate with the buyers online. Once you have completed pricing negotiation with interested buyers, Exkash.com will then help you collect the funds in your Perfect money account where you can proceed to request for bank transfer.
okpay to bank
Cashout perfect money to bank account
Perfectmoney Debit card
Egopay to bank
Bitcoin to Bank account
Bitcoin Debit card