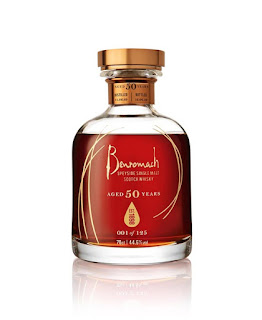 Benromach
The small Speyside distillery of Benromach has announced the release of its oldest ever single malt - the Benromach 50 years old. The rare single re-fill ex-Oloroso sherry hogshead cask (Cask #2003) was distilled and filled in 1969. This cask has yielded just 125 bottles and these will be available in selected specialist whisky retailers worldwide shortly. The whisky is bottled at the natural cask strength of 44.6% ABV and is non chill-filtered and of natural colour. It is presented in a bespoke decanter and wooden casket with a price of £8,000/ €9,000/ $10,000 US each.

Cragganmore
The Speyside distillery of Cragganmore has announced a special limited edition bottling to celebrate its 150th anniversary. The rare 15 years old expression has been matured in heavily charred American oak hogshead casks and there will be just 1,869 bottles available, to reflect the distillery's founding date of 1869. The casks used were selected by distillery workers. The Cragganmore 15 years old 150th Anniversary Edition is bottled at 48.8% ABV and is priced at £150 per bottle. It is only available to buy at the Cragganmore distillery shop.

"We are incredibly proud to celebrate the 150th anniversary of the distillery this year with a unique bottling hand-chosen by our distillery experts and myself. We wanted to create an extra special piece of whisky history."
Andrew Millsopp - Distillery Manager at Cragganmore. 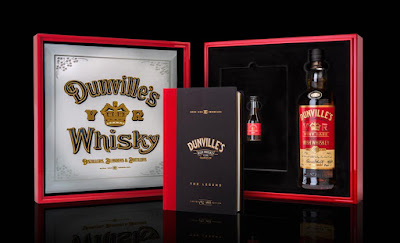 The Echlinville distillery in Co. Down, Northern Ireland has unvieled the latest release in its Dunville's Irish whisky range - the Dunville's Port Mourant Rum Finish 18 years old. The whisky has been finished in a single rare ex-demerara rum cask that had previously held very old rum from the now closed Port Mourant distillery in Guyana. It joins the Pedro Ximenez 12 years old, Three Crowns and Three Crowns Peated in the Dunville's range.

This new whisky is bottled at the natural cask strength of 57% ABV and is presented in a bespoke collector's box including a booklet explaining Dunville's whisky heritage and a small sample of 41 years old Port Mourant demerara rum that had previously been in the cask.

The Dunville's Port Mourant Rum Finish 18 years old is available from the Echlinville distillery and selected specialist retailers. A bottle will cost £585. No details of the number of bottles were given in the press release. 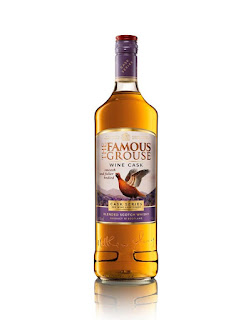 Famous Grouse
The blended Famous Grouse range, the UK's biggest selling whisky, has a new addition with the third bottling in the brand's Cask Series - the Famous Grouse Wine Cask. The new blend has seen the whisky finished for a short period in ex-red wine casks sourced from Spain and joins the Bourbon Cask and Ruby Cask in the range. The Wine Cask is bottled at 40% ABV and will initially be available exclusively in UK supermarket Waitrose. It will then see a wider distribution later in the year. A bottle is expected to cost £21. 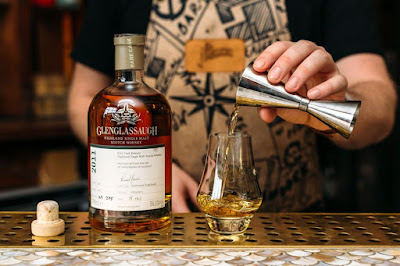 The coastal Highland distillery of Glenglassaugh has announced a colloration with award-winning Leith bar Nauticus to help celebrate their first anniversary.  The Glenglassaugh x Nauticus Rare Cask was selected by Kyle Jamieson and Iain McPherson, the founders of Nauticus, and Dr. Rachel Barrie, the Master Blender for Glenglassaugh.

The whisky was distilled in 2011 and filled to a rare ex-Sauternes dessert wine hogshead cask (Cask #288), then bottled at its natural cask strength of 56.1% ABV in May. There cask has yielded just 275 bottles. The Glenglassaugh x Nauticus Rare Cask is available directly from the Nauticus bar and also via retailer Royal Mile Whiskies. A bottle will cost £64.95.

"Our ethos in Nauticus is to always put Scottish produce and Leith’s rich wine and spirits history under the spotlight. This single cask of Glenglassaugh is a special landmark for us and was a clear winner, standing out with its fantastic character. We believe it captures our ethos perfectly in whisky form."
Kyle Jamieson. 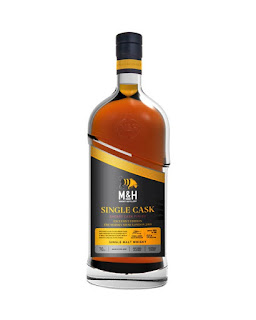 Milk & Honey
Israel's first whisky distillery of Milk & Honey have announced a special single cask released especially for The Whisky Show, which is taking place in London this weekend. The Whisky Show London 2019 Exclusive Edition was matured in a single ex-bourbon cask and then finished in a kosher ex-Pedro Ximenez sherry butt, which was specially seasoned for the distillery.

There are just 100 bottles available and these have been released at the natural cask strength of 55% ABV. Bottles will be on sale at the show via organiser The Whisky Exchange. The price was not revealed in the press release. The release is an appetiser for the full UK release of Milk & Honey single malt, which is expected for January 2020. For further information on Milk & Honey, please visit www.mh-distillery.com.

posted by Whisky For Everyone at 1:55 PM