Within Inbox we aim to write a few lines detailing each press release/piece of news/PR event that we have received and provide links, where possible, for you to find out further information.  We have been away on holiday so the new releases have piled up a bit. Therefore we have decided to split Inbox in to two parts. Part 1 can be found on the blog. This is the news that has grabbed our attention over the last two weeks. 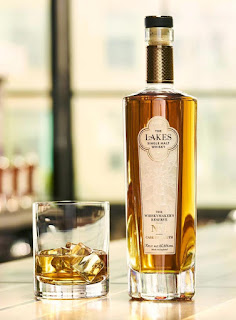 Lakes
The English distillery of The Lakes, located in the northern area of the Lake District, have announced the release of their first every single malt. The WhiskyMaker's Reserve No.1 is the first part of a planned wider range of whiskies and follows the distillery's 'sherry led style'. It has been matured in three tyoes of oak cask - made from American, French and Spanish oak - and these have previously held Pedro Ximinez sherry and red wine.

These have then been married together by Dhavall Gandhi, the whiskymaker at the Lakes. There are just 5,922 bottles available of the WhiskyMaker's Reserve No.1 and these have been released at the natural cask strength of 60.6% ABV. Each bottle will cost £65 and is available from www.lakesdistillery.com. 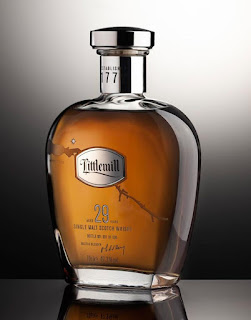 Littlemill
The Littlemill distillery, which closed in 1994 and was destroyed by fire in 2004, has added another rare single malt to its Private Cellar Collection - the Littlemill 29 years old. The last remaining rare stocks are being crafted by Michael Henry, the Master Blender, and this release is the third in the series. The new whisky has been matured in re-fill ex-bourbon casks and was distilled in 1990. It was then split with some being finished in first-fill ex-sherry casks and some in to Limousin oak casks.

The Littlemill 29 years old is presented in a bespoke decanter, designed by Glencairn Crystal, which features a hand engraved depiction of the River Clyde and the distillery's location (marked with a star). There are just 600 bottles and each comes with a crafted wooden box, a 5cl miniature of the liquid, a piece of an ex-Littlemill cask and a booklet telling the history of the distillery. It is bottled at the natural cask strength of 47.3% ABV and each decanter will cost £2,750/$3,450 US. 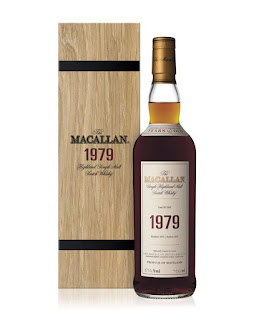 Macallan
The famous Speyside distillery of Macallan have announced the latest addition to their prestigious Fine & Rare Collection - the Macallan 1979 Vintage. The whisky was distilled and filled to a single ex-sherry puncheon (cask #2803) in February 1979, and has been bottled at 40 years of age. It has been bottled at the hefty natural cask strength of 57.2% ABV and the puncheon has yielded just 338 bottles. The Macallan Fine & Rare 1979 Vintage will be available in selected luxury retailers and whisky stores with a predicted cost of £10,300/ $12,850 US/€11,550 per bottle. 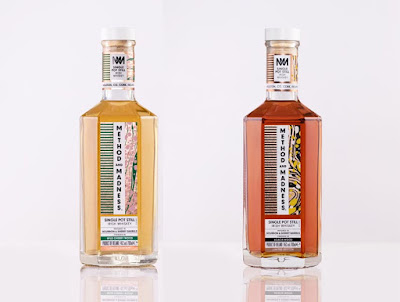 Irish Distillers have revealed two more additions to its experimental Method & Madness range of whiskeys, both continuing the tradition of using unorthadox casks for maturation. Both are single pot still whiskeys with one being finished in cherry wood casks and the other in acacia wood. Both are also bottled at 46% ABV.

The Wild Cherry Wood Finish has seen nine single pot still whiskeys part-matured in casks with wood sourced from France. The finishes range from seven months to four years to add increased complexity. Initial maturation was in ex-bourbon or ex-sherry casks. It will be available in selected markets including Ireland, the UK and travel retail with a cost of £82/€92.

The Acacia Wood Finish has again seen initial maturation in ex-bourbon and ex-sherry casks before being transferred to cask made with acacia wood again sourced from France. The whiskeys have undergine finishing periods ranging from one to four years. This release will be exclusive to the Celtic Whiskey Shop in Ireland and a bottle will cost £82/€92. 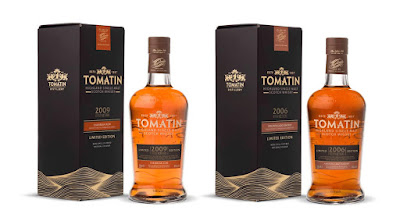 The Highland distillery of Tomatin has announced two new limited editions - the 2009 Caribbean Rum Finish and the 2006 Amontillado Sherry Finish. Both of the new single malts have undergine a nine year maturation in American oak casks. The 2009 has then experienced a one year finish in ex-rum casks from the Caribbean and is bottled as a 10 years old. There are just 7,200 bottles and each will cost £49/$62 US.

The 2006 has had a three year finishing period in ex-Amontillado sherry butts and is bottled as a 12 years old. There are just 5,400 bottles and each will cost £60/$75 US. Both new expressions are released at 46% ABV and are non chill-filtered and of natural colour. They will be available in selected specialist whisky retailers worldwide. For further information, please visit www.tomatin.com.

posted by Whisky For Everyone at 2:56 PM

Bourbons – like a lot of American whiskies – are usually a lot younger than equivalent Scotches, and that’s generally due to high humidity and a significant angels’ share. That’s not to say they’re inferior though – they just mature more quickly. What you’re looking at with bourbon is sweetness, flavour (especially vanilla) and smoothness in abundance.
https://icemakershub.com/best-sonic-pebble-nugget-ice-machine-reviews/
Who’s it for?
Essentially anyone can get into bourbon – particularly if they’re interested in trying whisky but not necessarily ready to start with Scotch and deal with the pretentiousness around it. Bourbon is very much a, ‘We’ve made this, do you like it? Oh, you don’t? Let’s move on then.’ It’s open to exploration and a nice gateway to more complex things.