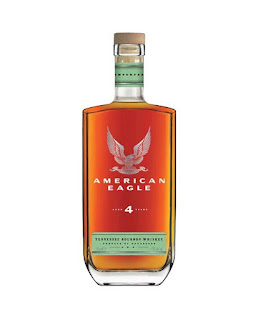 American Eagle is a bourbon whiskey brand that is distilled at an un-named distillery in Tennessee. It is bottled at four years of age, which is twice the legal minimum of two years for maturing bourbon in American oak barrels. It is rare to see a young age statement displayed on a bourbon and this shows the youngest whiskey included. Bourbon is traditionally made from a mixture of corn, rye, malted barley and wheat with a legal requirement to have a minimum of 51% corn. American Eagle uses 84% corn in the mash bill with just 16% then made up of the other grain mix. The brand is owned by Halewood International and the core range also includes age statements at 8 and 12 years of age.
The American Eagle 4 years old is bottled at 40% ABV and is available via selected specialist spirits and whisky retailers in the UK. A 70 cl bottle should cost around the £27-30 mark.
Our tasting notes
The colour is deep golden yellow and the nose has a vibrant and heady mix of sweet vs. spice. There are initial aromas of vanilla, maple syrup and toasted oak with further aromas of toffee and bitter orange. There are also pinches of all-spice and white pepper evident, along with hints of tinned peach and yeast.
On the palate this whiskey has a lovely sweetness to begin with and feels creamy and soft in the mouth. However, it is not long before the robust cereals and the oak spices from the nose kick in. The sweetness tends towards toffee and golden syrup, rather than the maple syrup exhibited on the nose. It is also packed with vanilla notes in particular and this is reminscent of essence rather than pods. Then comes a big kick of bitter orange and a hint of dessicated coconut, followed by emerging wood and baking spices - think of toasted oak, cinnamon, all-spice and hints of clove and white pepper.
The finish is dominated by the wood and baking spices which linger well. These add depth and a lovely warmth, especially once the sweeter notes begin to fade. The final element to go is the woodiness, which leaves a toasty and pleasant bitterness.
What's the verdict?
The American Eagle 4 years old offers plenty for your money. The classic aroma and flavour profile shows good balance between sweet and spicy notes. It is not the most complex bourbon you will ever try but it is very pleasant and drinkable. It is also interesting to see other brands emerging from the traditional whiskey making areas and adding choice for the consumer. Very nice neat and especially over ice.
It is also perfect for making any classic American whiskey cocktail as the flavours, especially the sweetness, stands out well when mixed. Recently, Matt attempted to make a Mint Julep as part of our Allotment Dram series of short videos. Subscribe now to our YouTube channel to keep up to date with new videos.
posted by Matt C at 1:04 PM

"It is bottled at four years of age, which is twice the legal minimum of two years for maturing bourbon in American oak barrels."

This is simply false. There is NO minimum time for bourbon to age in American oak, just that it ages in it. It can be as little as the maker likes (I have seen One Day on some labels) and still call it bourbon. For a bourbon to be labeled STRAIGHT Bourbon, Two years is the minimum.

Another thing to know is, any bourbon ages less than FOUR years must have the age stated on the label.

Using filler material or excessive amount of information can make the dissertation look unprofessional. You should also try to make sure all the information you have is accurate. You are curious to know more about a- grade dissertation, find out here.