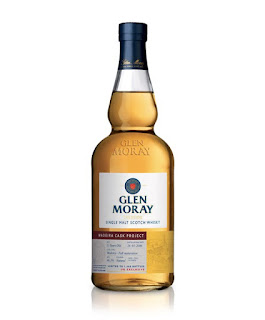 This whisky is the third addition to the Elgin Curiosity Range of single malts from the Speyside distillery of Glen Moray. The Glen Moray Madeira Cask Project is bottled at 13 years and 10 months of age and features seven rare ex-Madeira sweet wine hogshead casks that were hand selected by Kirstie McCallum, the Head of Whisky Creation at Glen Moray. These were filled on 26 May 2006 and were then fully matured in Warehouse No.1 at the distillery, where many experimental casks are kept. Madeira casks are uncommon in the Scotch whisky industry and are often used for a short finishing period rather than full maturation. This third edition follows the Cider Cask and Rhum Agricole Cask Projects.
The Glen Moray distillery is located on the outskirts of the city of Elgin, next to the River Lossie. The buildings began life as the West Brewery in 1828 and was later converted to become a whisky distillery in 1897. It is currently owned by the French drinks company La Martiniquaise, who took control in 2008. They have overseen a massive expansion programme, both in terms of increasing the annual production capacity to six million litres and a major revamp of the single malt range. This has resulted in a remarkable upturn in fortunes for the brand over the last decade.

"This new expression so very special. Ex-Madeira casks are typically used to ‘finish’ more conventionally matured whisky but almost 14 years of maturation in the casks have given a great balance of flavours between the wood and spirit. It is like a dessert in a glass."
Kirstie McCallum.

The Glen Moray Madeira Cask Project 13 years old is bottled at 46.3% ABV and is non chill-filtered and of natural colour. There are just 1,468 bottles and these will be available via selected specialist whisky retailers. It is exclusive to the UK. A bottle will cost £65.
Our tasting notes
The colour is deep golden yellow and the nose is packed with delicious sweet aromas. Toffee and milk chocolate are evident first and then heather honey, golden syrup and sweet over ripe pears. Underneath are further aromas of baking spice (especially cinnamon and all-spice), plus sultanas and something floral and perfumed. This is most reminiscent of honeysuckle.
On the palate this whisky has an immediately richness and decadent feel with plenty of viscosity and texture. There are juicy sultanas and super sweet pears to begin with and these notes evolve to include golden syrup and crumbly brown sugar also. Then come toffee and honey. The combination reminds us of stepping in to an old fashioned sweet shop. The baking spices from the nose then come through to give balance and stop the whisky becoming too sweet. Cinnamon, nutmeg, all-spice and a pinch of white pepper are all detectable. Finally, notes of white chocolate and cocoa powder appear to add a further intricate layer of flavour.
The finish is long and warming with the sweetness and increasingly influential spicy characteristics lingering well. There is a hint of toffee and gingerbread that also come through. The addition of water makes the whisky feel creamier and softer with the juicy dried fruits becoming more prominent. A twist of candied orange peel also appears.
What's the verdict?
This Madeira Cask Project is a fabulous whisky and Glen Moray have done very well to create this. It feels intricate and luxurious, and offers plenty for you money. Glen Moray seems to always offer good value. The combination and balance of the sweet and spicy elements is close to perfection. Do not be surprised if this single malt appears in our Top 10 whiskies of the year for 2020. We have ordered our full bottle before it is all sold out. Have you?
posted by Whisky For Everyone at 4:50 PM