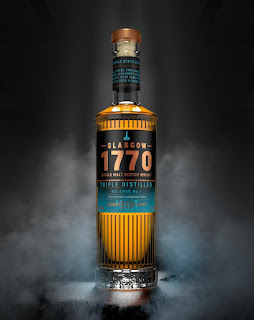 This whisky is the third and final expression for The Glasgow Distillery Co's 1770 Signature Range of single malts, which is named after the Dundashill distillery. This was Glasgow's first whisky distillery and was founded in 1770. This Triple Distilled expression joins the 1770 Original and 1770 Peated in the range. As the name suggests, this spirit has undergone a third distillation - this was the traditional method of spirit production practiced in a number of Lowland distilleries and is more commonly associated with Irish whiskey these days. The Glasgow Distillery Co. only switches to triple distillation for about a month each year. For this release the spirit has then been matured exclusively in virgin oak casks.
The Glasgow Distillery Co. began production in February 2015 and in doing so became the first distillery to produce single malt whisky in Glasgow in the modern era. It was founded by Mike Hayward, Liam Hughes and Ian McDougall, and is located in Hillington to the west of the city. The distillery has an annual capacity of 270,000 litres and initial reaction to the single malts has already led to an expansion being planned. The company also own Makar gin, which is produced at the distillery in a dedicated gin still, and the rare aged single malt label Prometheus.

"Our vision was influenced by Dundashill, which was founded in 1770 and inspired the name for our Signature Range of malts. They produced unpeated, peated and triple distilled whisky 150 years ago so we set out to do the same for the modern whisky era."
Liam Hughes - Co-Founder at The Glasgow Distillery Co.

The Glasgow 1770 Triple Distilled Release No.1 is bottled at 46% ABV and is non chill-filtered and of natural colour. It is currently available to buy at www.glasgowdistillery.com and selected specialist whisky retailers. A 50cl bottle will cost £49.
Our tasting notes
The colour is golden yellow and the nose has an immediate freshness and vibrancy. There are initial aromas of candy floss and vanilla sugar with plenty of crisp green apple. Underneath are further aromas of fresh apricot and green almond with some white chocolate and gingerbread-like spiciness.
On the palate this whisky is initially super sweet and then turns woody, spicy and is extremely drying. The sweetness again has this confected and fairground feel with plenty of candy floss, marshmallow, white chocolate and toffee apples evident. Then comes some honey and a touch of maple syrup, plus the vanilla sugar from the nose. There is also further apple that comes through, although this feels more like red apple now rather than the green from the nose. It is not long before the spiciness from the virgin oak starts to show its influence - this manifests itself as warming baking spices (especially cinnamon and all-spice, with a pinch of mace) and gingerbread, plus a hefty dose of toasted oak and cedarwood.
The finish is very interesting. The sweet and orchard fruits elements (the apple and apricot in particular) come back to the fore and are followed by a lovely warming and drying note. This is most reminiscent of cloves, with maybe a hint of liquorice root.
What's the verdict?
The 1770 Triple Distilled is the classic 'game of two halves' - it is sweet and confected, then drying and woody. However instead of becoming an issue as can sometime happen, this whisky somehow manages to integrate the two elements back together to create a delicious finish.
Classic virgin oak characteristics give very sweet, confected flavours then supercharged spiciness and wood. These marry well with classic young spirit characteristics of crisp apples and fresh orchard fruits. The result is a very promising single malt. Don't pretend that this is an older whisky, but celebrate its expressive youthfulness. Delicious and enjoyable.