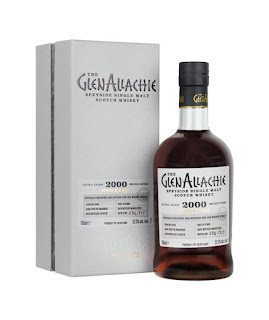 This whisky is a new single cask release that has been bottled for The Whisky World. The London based whisky retailer has two stores in north London, a successful online site and also host one of London's best whisky festivals. The selected single cask is an ex-Pedro Ximenez sherry hogshead barrel (Cask #6248). This was originally distilled on 19 April 2000 and filled to a re-fill ex-bourbon ASB (American Standard Barrel). It was then transferred for a 30-month finishing period in to the sherry hogshead, before bottling at 19 years and 11 months of age in March. The Glenallachie 2000 Single Cask has been bottled at the natural cask strength of 52.5% ABV and is non chill-filtered and of natural colour.
The Glenallachie distillery is located just outside the town of Aberlour in the Speyside region of Scotland. It was founded by Mackinlay, McPherson & Co. in 1967 and was designed by renowned distillery architect William Delmé-Evans. The current owners are The Glenallachie Distillers Co. who took over from Chivas Brothers in mid-2017. Under their ownership, led by Billy Walker, the brand has really begun to establish itself as a single malt brand. Previously, bottlings were rare with most spirit going in to a range of blends. The annual production capacity is four million litres.
The Glenallachie 2000 Single Cask is available exclusively from The Whisky World and costs £149.90 per bottle. The cask has yielded just 317 bottles, so purchases are limited to one per customer.
Our tasting notes
The colour is a very deep amber brown and the nose is immediately full of deep aromas - first come dark dried fruits (think of raisins, figs and dates especially) and then rich aromas of caramel, black treacle and a hint of espresso coffee. There are further hints of baking spice (cinnamon and all-spice in particular) and ripe tropical fruit - imagine pineapple and lychee. This nose makes you want to taste.
On the palate this whisky is big, bold and rich straight away. The dark dried fruits rise first again with notes of raisins, currants, dates and figs combining with some candied orange peel. These are quickly joined by caramel-like characteristic from the nose, along with a big spoonful of black treacle with dark chocolate and coffee grounds. Underneath is a pinch of white pepper and a suggestion of vanilla essence and toasted almonds. That tropical note from the nose puts in a late appearance with juicy ripe pineapple, lychee and a hint of mango. The complexity is further added to with deep underlying savoury notes including cigar wrapper leaf, dry Autumn leaves and warming baking spices - think of cinnamon, all-spice and some clove.
The finish is long and warming with plenty of the baking spices evident. The sweet and dried fruit elements slowly fade. With a splash of water the spices are dampened a little and this allows the tropical notes to come to the fore in a more forceful way.
What's the verdict?
This is a fabulously rich, deep and highly complex whisky. There is so much going on and on multiple levels. It is a classic 'sherry bomb' of a single malt but has more depth in the form of the extra savoury notes because of its advanced age. Anyone that likes this genre of whisky should definitely check this out before it sells out.
The cask selection is superb and having not tried many Glenallachie's in the past, it makes us want to try more. The fullness and richness is great and coats the mouth, which helps to elongate the finish in particular. Well done to The Whisky World - you have an excellent whisky on your hands.
posted by Matt C at 1:22 PM