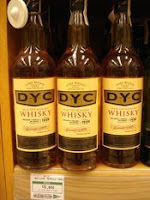 We found this blended whisky on our recent trip to Spain and having never heard of it, thought that we would give it a try. DYC is the abbreviated company name of Destilerias y Crianza del whisky, which opened Spain's first whisky distillery in 1959. The distillery is located in the town of Palazuelos de Eresma in the Castilla y Leon region to the north west of Madrid and has the capacity to produce a massive 20 million litres of spirit per year. The whisky is marketed to be low budget and is popular in Spain as it is much cheaper than Scottish, Irish or American whiskies. It is designed to be mixed with non alcoholic beverages and be easy drinking in the hot weather. A one litre bottle will cost you between 10-12 euros (about £8-10). This regular DYC release is a blend of malt and grain whiskies that have been matured in crianza red wine casks. So we had to try it! 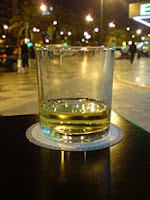 I got a strange look from the bar woman when we ordered it straight and she almost insisted that we had some cola with it. She then proceeded to pour me the rest of the bottle which must have been the equivalent to a quadruple shot (or a quintuple, if that's a real word) and this left me wondering what we had let ourselves in for and how popular this stuff really was? How long had she had that bottle sitting there? Had she won a prize from her boss for finishing the bottle off? This cost me only 7 euros! The colour is a very pale gold and the nose is very light with almost nothing there. There is a bit of vanilla and caramel with a whiff of alcohol and petrol (never a good sign, but then we were sitting outside next to a main road!). On the palate, it is again very light with the vanilla notes prominent and also something herbal (think of fresh cut grass) coming through. The finish is short, very sharp and almost acidic. We were both pleasantly surprised that it was actually quite nice! It doesn't have the complexity of other whiskies that we have tried but was thirst quenching and we could see how it was popular in a hot climate, maybe with ice or a mixer. This is a simple blended whisky with minimal character (we thought there would be more influence from the crianza wine casks, as this is a full bodied red wine that should add more fruitiness) but one that is easy drinking, refreshing and dirt cheap. If you are ever in Spain, it is worth a try.
posted by Matt C at 12:50 PM

I had a bottle of DYC forced upon me in Majorca many years ago. I can't remember what I was trying to buy, but when I took the bottle up to the counter the store owner insisted on swapping it for DYC. I didn't put up too much of an argument because it was so cheap.

Can't really recall what it tasted like, but I do remember feeling pretty awful the next day! I always figured that DYC was the chemical formula for whatever they put in the bottle!

DYC is the best. In barcelona and malaga it came duct taped with a 2 liter of coke for 8 euros. DYC is not only good for the mind and the body, it is quite soul refreshing with its godlike taste and aroma. There was the cheap bottle then they also sold DYC green label and DYC black label which came in a tin... the classiest of the classy right there. can't beat that spanish dyc

Not much to add to the Blog entry. - It is like you wrote: not a very special Whisky, but light and not too complex. - Pretty nice and I take some of it back from my holidays every time I'm in Castilla y Leon.
Too bad you cannot get this elsewhere in Europe. - By the way: the quadruple / quintuple shot that you got is quite usual in Castilla... I remember once, the waiter came with the bottle to our table, poured the drink and said "you tell me 'when!'" - In another bar they served me a tumbler to the top with Whisky and they called it "Pelotazo", so the feeling you have when you have been hit by a football right in the face from a short distance...
well sometimes they tend to exaggerate... no wonder the N°1 death-cause in Spain is liver failure and diabetes... :-)

Any ideas where i could buy DYC whiskey online?

or any stores that may carry it in the u.s?

Been drinking Dyc for many years now.......especially in Spain.
And can I be quite honest? Prefer it to scotch!

I'm spanish, born and raised in Madrid, and in my opinion this whisky is something you only drink if you're desperate to get drunk on the cheap on account of a bad day and don't mind having the worst hangover in history the day after. I NEVER drink it, In my opinion it's just no good.