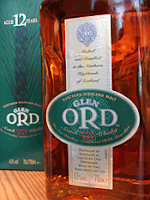 Glen Ord was the first distillery that we ever visited. We can definitely recommend the tour there as you get to walk around the working distillery and was very informative. Also, you get to taste the goods at the end, which makes it even more worth while! It is based to the north of inverness in a small town called Muir of Ord (not the best place to be stuck for any length of time, trust us...!). The surrounding area is referred to as the Black Isle. This is one of the most fertile areas of farm land in Scotland and as a result is reknowned for growing some of the best barley. Glen Ord is owned by drinks giant Diageo and is their fourth largest distillery in Scotland, producing over 3 million litres of whisky per year. Despite this, the only current official release from the distillery is this 12 years old. Most of the whisky produced at Glen Ord is used in the blending of the Johnnie Walker range, which is a massive global brand.

The nose has some sweetness and maltiness (imagine the smell of a sweet style of bread, like a brioche) with some dried fruit (raisins and sultanas). On the palate, it is the malty flavour that is prominent and this combines with more dried fruit sweetness to give a lovely creamy feeling in your mouth. There is also hints of citrus and nuts (think of lemon zest and almonds) and something spicy right at the end (ginger or cinammon, I couldn't quite decide). The finish is reasonably short but is creamy, malty and soothing with that spicy note coming through again. we purchased our bottle at the distillery but it can be found in most independent retailers for around £30. Some people find Glen Ord a bit too malty with lots of barley influence but we really like it. This is maybe because we have a soft spot for the distillery and the memories of the visit. It is a very pleasant whisky that is not the most complex but very good and enjoyable.
posted by Matt C at 11:37 AM