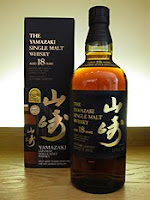 Japan's oldest whisky producer
The story of the Yamazaki distillery is essentially the story of the whisky industry in Japan. Yamazaki is the country’s oldest and first whisky distillery. Shinjiro Torri was the Japanese whisky industry's pioneer and founder. His idea was to found a distillery and corner the potential market for whisky sales in Japan in 1923. The distillery is located in the rural village of Yamazaki, which lies between the cities of Osaka and Kyoto. The current distillery has a capacity of seven million litres per year, making it one of the largest whisky distilleries in the world and beating most in Scotland. It also has the busiest visitor centre of all Japanese distilleries and this includes a bar that contains over 120 different Yamazaki whiskies of differing ages and cask types!

The birth of Suntory
Shinjiro Torri's Kotobukiya Company funded the building of Yamazaki and production started in 1924. Masetaka Taketsuru, who was Torri's protégé and the man who had visited Scotland to learn production techniques and traditions, was appointed as distillery manager. Kotobukiya changed its name to Suntory in 1929, with the new name being derived from Torri-san, the Japanese title of Shinjiro Torri. The first whisky, a blend of their single malt and grain whiskies, was released in 1932. Interestingly, this blend also included some imported single malt from Scotland. Shortly afterwards, Taketsuru left to start Yoichi, which started production in 1934. The first purely single malt whisky from Yamazaki (the 12 years old) was not released until 1984 and was followed by this 18 years old in 1994. The core range also currently includes the popular 10 years old and these are joined by occasional limited releases.

For further information and history of Yamazaki and other Japanese distilleries, please visit the Japanese section of our website - whiskyforeveryone.com.

Our tasting notes
The Yamazaki 18 years old has started to pick up awards around the world in the last two years and should cost approximately £70 a bottle. This whisky has been matured in a complex mixture of casks including ex-bourbon, ex-sherry and Japanese mizunara oak. The colour is deep amber and the nose is rich, expressive and very tempting. It is full of dried fruits (imagine raisins, sultanas and dried apple), burnt dark sugar/caramel, malty cereal grains and an almost overwhelming but very pleasant citrus note (think of candied peel or orange marmalade). On the palate, the richness is joined by more sweetness than the nose suggests and has a complex mix of notes - distinctive citrus peel (oranges again), dried fruits (sultanas especially), lots of cereal grain, vanilla, caramel, oak and woody spiciness (this is quite bark-like, think of cinnamon). The finish is long, soft and enjoyable with the orange citrus notes, caramel and grains particularly prominent. There is maybe just a hint of some peat smoke in the background also and this seems slightly musty and mossy.

What's the verdict?
Yamazaki 18 years old is a top quality dram. We have sampled it on a number of occasions now, and it seems to be better than we remembered each time. The whisky demonstrates the interesting products that are currently coming out of Japan and it is easy to see why this continues wins multiple awards. The balance between sweetness, richness and spiciness is very good and creates an excellent, complex dram that allows you to discover new aromas and flavours each time you drink some.
posted by Matt C at 11:40 AM

Very good post as always matt.
i liked this 18, but i do feel the price is somewhat high..

here's a head to head of the 12 and 18 i conducted earlier this year :