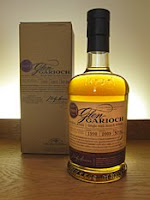 Scotland's most easterly
Glen Garioch (pronounced glen-geery) was founded in 1797 by Thomas Simpson. This makes it one of Scotland's oldest whisky distilleries that is still in operation. Glenturret is the oldest having been opened in 1775. The original name was Glengarioch (the Garioch being a fertile strip of local farmland that is well known for producing top quality barley) before changing to Glen Garioch in the 1930s. It is located in Oldmeldrum, a small town in the Highlands, which is close to Aberdeen. The distillery is Scotland's most easterly and has an annual production capacity of approximately one million litres.

A change of style
Glen Garioch is currently owned by Morrison Bowmore, which is a subsidiary of the Japanese company Suntory. They took control in 1994 and one year later, they decided to temporarily close the distillery (this is called mothballing - the process where a distillery is closed but all the equipment remains intact and ready to go again, when required). Until then, Glen Garioch had produced a lightly peated style of whisky but when it reopened in 1997, Suntory decided to stop this practice and go for a non peaty style. The range of whisky is small and has just been completely revamped. The Founder's Reserve and a 12 years old form the main part of the range and these are joined by two vintage expressions, 1978 and this 1990 (both of which are in the previous lightly peated style). These were only released in Autumn 2009.

Our tasting notes
The colour of this 1990 Vintage is golden and the nose is sweet and rich. There are plenty of caramel, honey and cereal notes initially and these are backed up by further aromas of woody spices (think of cinnamon and nutmeg), dark dried fruits (imagine raisins and prunes) and some soft peat smoke. There is also something darker lurking in the background that is reminiscent of a high percentage chocolate and ground coffee. On the palate, this is soft yet sweet and the full bodied nature coats your mouth. The sweetness is very honey-like. The characteristics from the nose are all present - caramel (although this is more like treacle/molasses now), cereal grains (this has a more bread/yeasty/biscuit quality than before), wood spices, dried fruits and the subtle, soft peat smoke (imagine damp moss or earth). In addition, there are hints of nuts (think of almonds), vanilla and eucalyptus/menthol. The finish is very sweet, fruity and full of caramel - it's rich with some nice subtle smokiness, becoming spicy (that cinnamon and nutmeg again) and drier (imagine oak wood) at the very end. The addition of water gives it a more creamy, buttery feel but with much less of the interesting wood spice and cereal notes.

What's the verdict?
This 1990 Vintage is bottled in small batches (this one was bottled in 2009, making it 19 years old), at cask strength (54.6% ABV) and will be available through specialist retailers for around £65-70. It is a lovely and rich dram that offers a lot of complex characteristics, plus the pleasant surprise of that soft peaty smoke. The whisky is very sweet but well balanced and is enjoyable and easy to drink, even at its cask strength. A good whisky from an under rated distillery.
posted by Matt C at 10:52 AM