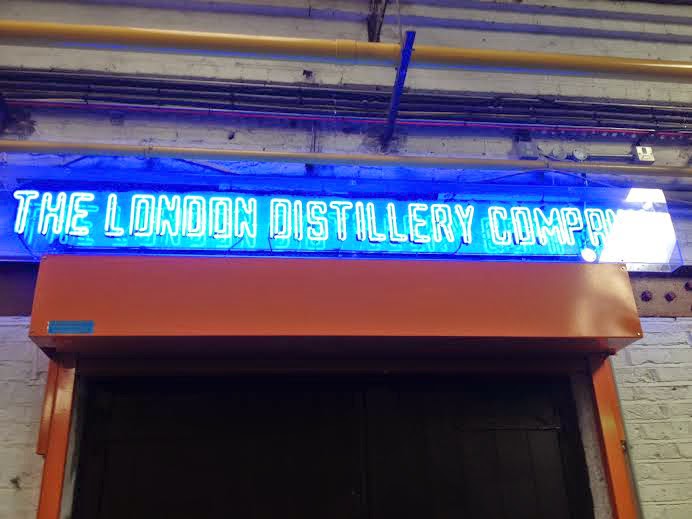 Being based in London and blogging about whisky definitely has its perks.  Many companies, PR agencies and brands use the capital to launch their new whisky products or to hold events. We have benefited from this activity and we acknowledge that Whisky For Everyone has grown in to what it is today because of that.  However, London is a long way from most of the world's whisky distilleries ... until recently that is.  Therefore we were delighted when we were recently invited to pay The London Distillery Company a visit.

The London Distillery Company was founded in 2011 by Darren Rook and Nick Taylor.  The distillery is housed in a renovated warehouse in the south London area of Battersea.  It sits approximately 150 metres from the banks of the famous River Thames.  The project took a couple of years to develop to the point where production could start and included the first license to be granted to distil whisky in London for over 100 years.  The previous distillery (Lea Valley located in Stratford, east London) was closed in the early 1900s.

Darren, who we first met during his time as the manager of the Scotch Malt Whisky Society's London venue four years ago, took the tour.  The pride and passion that he has for the distillery and the attention to detail are immediately evident.  The time, effort and research that has been undertaken to date comes through in every aspect of the place.

The distillery plans to install solar panels on the roof to provide power for the distillery in the future. There is also a unique water cooling system that has been installed and this recovers heat from the stills and redistributes it for use elsewhere in the distillery. The raw materials for whisky making are all sourced within a 100 mile radius of the distillery, including historic yeast strains from Surebrew in Surrey and malt made to the distillery's own specification from Warminster Maltings in Wiltshire.  All ingredients are organic.

The mashing and fermentation are both take place on site.  The stainless steel mash tun has a capacity of 3,200 litres and each batch uses 400-500kg of malted barley.  The amount used varies dependent on the strain of barley being used - older varieties need more as they contain less sugars.  They are currently producing two mashes per week and this results in two hogshead sized casks worth of new make spirit.  Three waters are used to extract the maximum soluble sugars from the barley - the first at 63.5ºC, followed by two more at 70ºC.

There are two stainless steel washbacks where the fermentation part of the process takes place.  Each holds 2,800 litres of wort (the sugary liquid produced by mashing).  Darren explained that they are currently experimenting with different types of yeast and that each type effects the fermentation times.  The traditional distillers yeast currently takes 3-4 days to ferment, while the older styles of brewers yeast that they are trying take 4-5 days.  The final resulting liquid is called wash and has an alcoholic strength of 8% ABV.

The wash is then distilled in a bespoke still that is clearly Darren's pride and joy.  The still was hand crafted in Germany and is named Matilda after Darren's grandmother.  It resembles part copper pot still, as used in traditional single malt production, and part column still which are more commonly using in the distillation of single grain whiskies.  The wash run lasts approximately six hours, while the spirit run lasts around seven hours.  Again, Darren explains that they are experimenting with different distillations.  Most of the new make spirit is distilled twice, but they have also tried triple distillation.

The new make spirit, which they first produced last December,  comes off the still between 72% and 74% ABV and the plan is to fill and age the spirit in to a variety of casks.  These include traditional oak casks (both new/virgin and ex-bourbon), plus experimentation with other types of wood such chestnut and British oak.  Further experiments will take place as they will be filled at three different strengths - the still ABV, 65% and 63.5% ABV - so as to determine which strength and wood combination produces the best maturation and final product.

No London Distillery Company single malt whisky will be on the market for a number of years.  However, the distillery also produce gin.  This is distilled in a small alembic still, named Christina after Darren's wife, which has a capacity of just 140 litres and sits to the side of the main distillery floor.  The gin is distilled using a blend of botanicals, both traditional and non traditional (including honey), which has been developed by Darren and his team.

The resulting spirit is bottled as Dodd's Gin, which was first released about a year ago and has gained much acclaim.  It is named after Ralph Dodd, who was an entrepreneur in the early 1800s.  One of his engineering projects, which ultimately failed, was a proposed whisky distillery for London.  All Dodd's Gin is bottled and hand labelled on site.  It now has an increasingly wide distribution in bars and specialist spirits retailers, including a recent limited edition which was bottled exclusively for Fortnum & Mason.

We would like to thank Darren and Kirsty from Chant Communications for arranging our visit to The London Distillery Company and for the tour and information.  When we spoke to Darren a couple of years ago about this project, it was difficult for to imagine the amount of work and scale of getting it all off the ground and to fruition.  The final result, the attention to detail and intense amount of research and experimentation is highly impressive.  We cannot wait to taste some of the whisky, but know we have a long wait to do so.  In the meantime, we wish Darren and the team every success.  If you are ever in London, please go and check the distillery out.

Tours around The London Distillery Company's facility in Battersea can be arranged by appointment only - simply contact tours@londondistillery.com.  The cost is £15 per head and this includes both the gin and whisky processes, plus a tasting of Dodd's Gin.

posted by Whisky For Everyone at 7:20 PM

There is a chance you qualify for a new government solar rebate program.
Click here to find out if you are eligble now!