AnCnoc - Millenium malt
The east Highland distillery of Knockdhu has announced the latest release in its vintage series.  The latest is made using casks that were filled in 2000 and these are a combination of Spanish oak ex-Sherry butts and American oak ex-bourbon barrels.  The Vintage 2000 is limited to just 6,000 bottles and it is bottled at 46% ABV, is non chill-filtered and of natural colour.  It will be available in selected markets (Japan, Russia, Sweden & the UK) shortly, costing £55 a bottle.

Arran - More Moor
The independently owned Isle of Arran distillery have announced the fifth edition of their peated Machrie Moor expression (pictured, left).  The whisky is Arran's only smoky single malt and is named the location on the island where the legendary giant and warrior Fingal used to tether his dog, Bran. This year's release is bottled at 46% ABV and is limited to 12,000 bottles.  The recommended retail price is £42.

This year also sees the first release of a cask strength version of Machrie Moor.  This is bottled at 58.4% ABV and is presented in different packaging (pictured, right).  There are just 6,000 of the Cask Strength and this will retail for £50.  Both expressions will be available from early October in selected markets including France, Germany, Japan, Russia, the UK and the USA.  They can be purchased via www.arranwhisky.com or specialist whisky retailers. 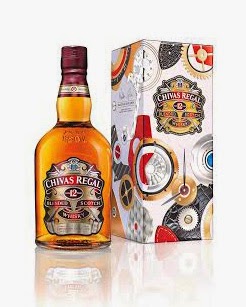 Chivas - Made For Gentlemen III
The popular blended Scotch whisky brand of Chivas Regal has announced the latest collaboration in its Made For Gentlemen collection.  This limited edition sees the brand team up with luxury British watch designer Bremont.  To celebrate the collaboration Bremont have produced 12 special commemorative watches, which will be auctioned for charity in October and November - details of this can be found at www.chivas.com/bremont.

A special tin has also been designed, which will be available shortly in domestic and travel retail markets, which houses a bottle of the regular 12 years old expression.  The collaboration is the third in the Made For Gentlemen series, which has also featured shoemaker Tim Little in 2012 and Savile Row tailor Patrick Grant in 2013.

Glenlivet - Half century selection
The popular Glenlivet have become the first Scottish distillery to announce a range of 50 year old single malts.  The bottlings will be called The Winchester Collection, which is named after Glenlivet's Master Distiller Alan Winchester.  The inaugural release is the Vintage 1964 and there are just 100 bottles.  They will be sold in selected markets including China, Taiwan, the UK and the USA.

The cask that Winchester selected was filled in 1964 by Captain Bill Smith-Grant, the last remaining descendent of Glenlivet's founder George Smith.  Each bottle will cost £18,000 (US$25,000).  Further release details have yet to be released, apart from the fact that the next one will be from 1966.

Glenmorangie - The Chosen One
The Highland distillery of Glenmorangie have released the single malt that has been selected by their Cask Masters programme.  The process of selecting and marketing this whisky began 18 months ago and has seen members of the public choose between three initial whiskies, select a name, design the packaging and photography, and finally choose the venue of its launch event.  The result is Taghta, the Gaelic word for 'the chosen one'.

The whisky, which has been part matured in ex-Manzanilla sherry casks, will be launched at the Glenmornagie distillery in Tain and there will be just 12,000 bottles.  These will only be available to registered Cask Masters.  It is priced at £69.99 and bottled at 46% ABV.  It can only be purchased via www.glenmorangie.com/caskmasters.

Dr Bill Lumsden, the Director of Distilling & Whisky Creation at Glenmorangie, says: “No other whisky has ever had consumers involved in all stages of the creation process. We are immensely proud of the final product. Taghta is a ground breaking, complex, rich whisky inspired and created with our fans for our fans. The result is an innovative blend of traditional craftsmanship and modern influences.”

posted by Whisky For Everyone at 7:32 PM