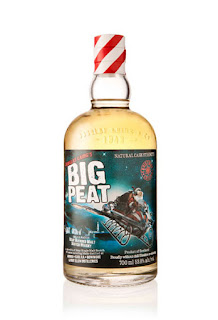 Big Peat is a blended malt that is produced by the independent bottling company of Douglas Laing.  The brand is made exclusively from Islay malts and is known for its punchy, smoky character. It forms part of a wider range of blended malts from Douglas Laing, which celebrate each of the major whisky regions in Scotland.  These are named Rock Oyster (Islands), Scallywag (Speyside) and Timorous Beastie (Highlands).  The Big Peat Christmas Edition was first released in 2011 and is essentially a cask strength version of the regular Big Peat.  The bottling is released annually and has built up a cult following.

The Big Peat Christmas Edition 2015 is bottled at 53.8% ABV.  Each year the release is presented in new packaging. There will be 18,000 bottles available and these will be distributed between selected worldwide markets.  The recommended retail price is £49.95 per bottle.

Our tasting notes
The colour is a pale lemon yellow and the nose is immediately smoky with feisty peat aromas catching in the nostrils.   The peat smoke has a mix of ash and medicinal iodine to it and is backed up by some lighter aromas of earthy malted barley, vanilla and icing sugar.  There are background hints of raw chilli, lemon zest and something floral (possibly honeysuckle).

On the palate the whisky packed with plenty of peat smoke and little else to begin with.  The peat smoke notes are a combination of different types - ashy bonfire embers, coal tar soap, crumbly dried earth and medicinal iodine.  The combination creates a full on experience that has a bitter and acrid feel.  Only with plenty of time in the mouth or the addition of water are further notes truly allowed to reveal themselves - vanilla, honey, a hint of golden syrup, malty cereals and candied lemon peel.  Further hints of white chocolate, icing sugar, cinnamon and fresh green chilli add some depth.

The finish is peaty and very dry.  The acrid ashy note in particular dominates, especially once the light sweet characteristics fade.  The peaty, smoky flavour lingers for ages and becomes increasingly dry, particularly when sampled at the full cask strength.

What's the verdict?
This Big Peat Christmas Edition is a big and bold whisky that is not for the faint hearted.  Fans of heavily peated whiskies will love it.  Everyone else may find it a challenge.  There is nothing wrong with that, as that is what it is designed for.  If you have a friend or family member that has a preference for peaty whiskies then this could be a good gifting option for them.

At cask strength the peat smoke influence allows few other characteristics through and seems overwhelming at times.  However, the more submissive elements are allowed to shine a little better when water is added.  It can actual take quite a lot of water and becomes softer and sweeter with the peat smoke becoming sweeter also.