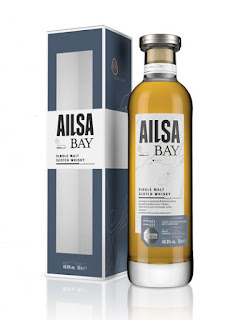 Ailsa Bay - First malt appears
William Grant & Sons have announced the official launch of Ailsa Bay, a new peated single malt from their Lowland distillery based in the town of Girvan.  It is the first release from the distillery that was founded in 2007.  The whisky is a combination of liquid that have been matured in four different types of cask - refill American oak, first fill bourbon, new oak and Baby Bourbon casks previously used by William Grant's Hudson distillery in New York.  These casks have been selected and by Brian Kinsman, the Master Blender for William Grant.  The contemporary packaging features a map of the bay and a granite stopper.

The whisky carries no age statement and is bottled at 48.9% ABV.  Ailsa Bay has been available since November in Scandanavia but has now been officially launched in the UK.  It will be available shortly through selected specialist whisky retailers and has a recommended retail price of £55 per bottle.

“Ailsa Bay is a testament to our whisky-making expertise and the skills of our master blender Brian Kinsman. We invest heavily in keeping the innovation conveyor belt going. Hopefully, we can do this in a pioneering way that respects the traditions that our family has passed down through the generations.”
Peter Gordon - Director at William Grant & Sons. 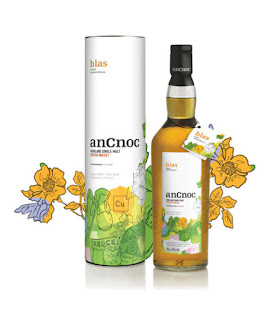 AnCnoc - Tailored new malt
The Highland single malt brand of AnCnoc, which is produced at the Knockdhu distillery, has announced a new expression featuring a collaboration with highly regarded Savile Row designer Patrick Grant.  The whisky, named Blas (which translates as 'taste' from Gaelic), has been matured in a combination of American oak and Spanish oak casks.  It is non chill-filtered and of natural colour.

The packaging and associated artwork has been designed by Grant, the creative director at Savile Row tailors Norton & Sons, and draws inspiration from the rugged landscape around the distillery.  A bottle will cost £50 from selected independents and specialist whisky retailers.

“Everything in the print is from the hill, the village of Knock or within the distillery itself and tells the story of the making of Blas. I’ve tried to interpret anCnoc’s history and tradition in a modern way, and hope this is translated through the aesthetic of the bottle.”
Patrick Grant - Creative Director at Norton & Sons. 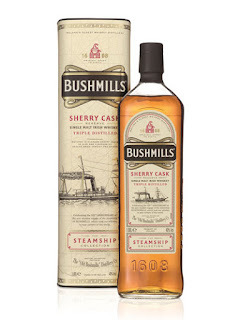 Bushmills - Full steam ahead
The Irish distillery and brand of Bushmills has announced a new series of whiskeys that are to be exclusive to the travel retail sector.  The Steamship Collection is inspired by the travels of the boat SS Bushmills, which sailed the globe in the late Victorian era and returned to Ireland with a variety of different wines and spirits in cask.  The first release in the series is the Sherry Cask Reserve, which has been matured in first-fill Oloroso sherry butts, and will be initially available in Belfast, Dublin and London Heathrow T5 airports.  Further markets are planned for the near future.

The Sherry Cask Reserve will be joined by two other permanent expressions in The Steamship Collection, plus occassional limited editions.  It is bottled at 40% ABV and will cost £65/€80 for a one litre bottle.

"For centuries distillers have experimented with different barrels so naturally I was inspired by the adventures of the ship and the opportunities it opened to experiment with various casks from around the world."
Colum Egan - Master Distiller at Bushmills. 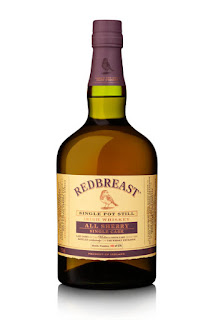 Redbreast - First ever single cask
Redbreast, the Irish single pot still whiskey that is produced at Irish Distillers' Midleton distillery in Co. Cork, has announced the release of its first ever single barrel expression.  Cask number 30087 is an ex-Oloroso sherry butt that was filled at Midleton in 1999 and has yielded 576 bottles.  It was selected by Billy Leighton, Head Blender at Midleton, and staff of retailer The Whisky Exchange and will be on sale exclusively through them.  The whiskey has been bottled at the natural cask strength of 59.9% ABV, is non chill-filtered and will cost £180 per bottle.

"We are confident that Redbreast Single Cask offers a new and interesting interpretation and experience that will quench the thirst for innovation and choice in whiskey among Redbreast fans, Irish whiskey drinkers and spirits aficionados alike. We are committed to whiskey innovation and look forward to more new releases for whiskey fans to enjoy over the coming year."
Brendan Buckley - Global Innovation & Whiskey Portfolio Director at Irish Distillers.

posted by Whisky For Everyone at 7:07 PM

Get all your favorite alcoholic drinks on Duty Free Depot!

All the popular brand name beverages for unbelievable low prices.