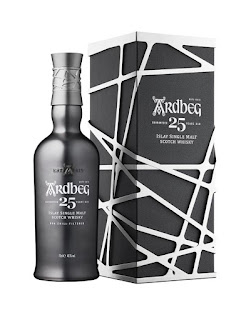 This new whisky represents the oldest expression to enter the core range of Ardbeg to date. The single malt is particularly special given that the cult Islay distillery was out of production for large parts of the 1980s and 1990s when this was distilled. During that time, Ardbeg was only operated for short periods each year and often by staff from other distilleries on the famous whisky island. Therefore, the liquid is extremely rare and will be released in small batches. The Ardbeg 25 years old has been created by Dr. Bill Lumsden, the Whisky Director for Ardbeg, using a tiny selection of casks that were filled in the mid-1990s.

The Ardbeg distillery is located on the southern coast of Islay and was founded in 1815 by John MacDougall, although records have distilling on the site as far back as 1794. The recent history shows numerous changes of ownership from the 1950s right through the fallow period of the 1980s and 90s, until The Glenmorangie Company (now Moet Hennessy) took over in 1997. This signalled the rebirth of Ardbeg. The distillery has an annual production of just 2.4 million litres per year and boasts an award-winning visitor centre and The Ardbeg Committee, which has over 100,000 members worldwide.

"After a quarter of a century in the cask you would be forgiven for imagining that the whisky may have lost some of the hallmark Ardbeg smoky punch. I can assure you it has not. There is a remarkable complexity and elegance that I find utterly captivating."
Dr. Bill Lumsden.

The Ardbeg 25 years old is released at 46% ABV. It is presented in a black bottle and housed in a gun metal casket encased within an intricate metal cage. It will be available in limited quantities via specialist and luxury retailers worldwide, including the numerous Ardbeg Embassies. A bottle will cost £710/ €830/ $990 US.
Our tasting notes
The colour is golden yellow and the nose is packed with wonderful aromas. Immediately there is butterscotch, toffee and golden syrup leaping out of the glass. These sit alongside aromas of peat smoke - these have an earthy, ashy and slightly flinty quality to them with a touch of moss and seaweed - and hints of gingerbread, liquorice, waxy furniture polish, brine and banana bread.
On the palate this whisky is luscious and velvety but with an instant peppery kick (think of white pepper especially). This evolves in to a wonderful savoury peat smokiness - imagine old leather, cigar box, a dusty and earthy spice rack alongside damp moss, charcoal embers and ash, seaweed laced with iodine plus a touch of salinity and coal tar soap.
Then comes some much needed sweetness in the form of sumptuous golden syrup and honeycomb notes, which are backed up by the butterscotch and toffee from the nose. There is also a distinct fruitiness that underpins everything - think of baked apple and pear, caramelised pineapple and a drop of orange oil late on. Late hints of cocoa and powdered ginger, oat cookies, liquorice root and a twist of lemon zest add even further depth and complexity.
The finish is long, warming and drying. The ashy and flinty notes last longest and are helped by the peppery kick and oat-like biscuit quality that appeared late on the palate. The sweet characteristics leave their mark but eventaully fade, as do the cooked fruit notes. The flinty, ashy dryness seems to then go on forever.
What's the verdict?
The Ardbeg 25 years old is a stunner and a rare treat indeed, especially when you consider how little whisky was produced at the distillery in the mid-1990s. That period was a difficult one for the Scotch whisky industry, especially remote distilleries like Ardbeg and some did not make it out the other side.
Thankfully some islanders had the foresight to keep Ardbeg ticking over and we are now seeing the rewards, both in terms of the liquid for this superb bottling but also for the brand and distillery as a whole. It seems to go from strength to strength and we love what they are doing. Long may it continue.
posted by Matt C at 11:13 AM

Whiskey will be tastier if served nicely.

I gave my husband a decanter Kemstood for his birthday. Beautiful. Both bourbon decanter and glasses are produced lead-free by professional artisans. Absolutely awesome. Overall, I’m very very pleased.
Link to site https://kemstood.com/