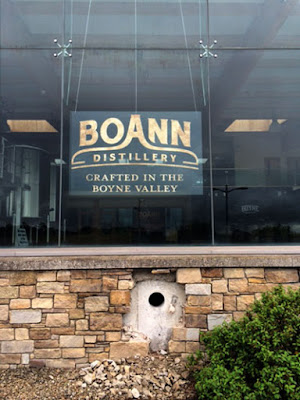 Boann is owned by the Cooney family and forms part of the Na Cuana group.  Na Cuana translates as The Cooneys from Irish Gaelic.  This group includes the Boyne Brewhouse, which is on the same site as the distillery and produces a range of craft beers, the Adams Cider Company, which produces cider using apples from the family's own orchards, and Robert A. Merry & Co. Ltd, producers of a range of Irish cream liqueurs.


Upon walking in you cannot help but notice the Italian marble floor that stretches from the entrance back through the distillery.  This remains from the car showroom days.  The entrance area will become the visitor centre, which will feature a restaurant and exhibition space.  There will also be a suspended walkway to allow visitors to see the distillery from an elevated level and a rooftop botanical garden that will supply ingredients for the gin.


Most distillery tours begin with a visit to the maltings or mill room.  Boann will not have its own maltings and will use 100% Irish grain to produce a pot still style of whiskey.  This will be a mix of malted and unmalted barley.  The mill had recently arrived and remained in its transportation wrapping as it waits to be installed in the purpose built extension that will be the mill house. Two grain silos will be located outside.

Next to the mill are two large vessels - the mashtun for processing the malted barley and the cereal cooker for the unmalted.  Next to these are eight washbacks for fermentation of the mash.  These are stainless steel and each hold 10,000 litres.  The water used for production for both the distillery and brewery is from the nearby Platin Basin and they will use 20,000 gallons (90,000 litres) per hour at peak times.

The mill, mashtun, cereal cooker and washbacks are tucked away and not really visable unless you are inside the distillery.  The stills on the other hand are the opposite, sitting in full view of the main road that runs past the front of the distillery.  This is thanks to the floor to ceiling windows of the ex-car showroom and they are a head-turning sight. 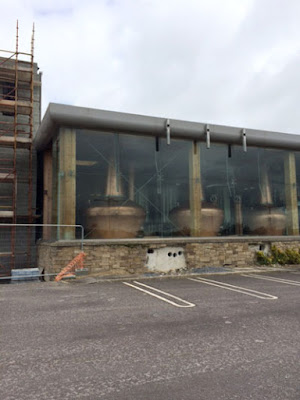 The stills are some of the most eco-friendly in the industry.  They have been constructed especially for Boann by Green Engineering in Siena, Italy.  The stills have a design consisting of a large pot and a wide short neck to create the style of pot still whiskey that Boann desire.  The stills are 'jacketed' for heat recovery and energy efficiency and have a specially coated neck and lyne arm to increase copper contact with the evaporated and re-condensed spirit.

Boann are the first whiskey distillery in the world to employ this technology, which is currently being used by two rum distilleries and one that produces raki in Turkey.  The wash still has a capacity of 10,000 litres, the intermediate still is 7,500 litres and the spirit still is 5,000 litres. All three are steam fired and are nicknamed Sunshine, Sal and Celestine respectively.  The capacity will be an estimated 200,000 litres per year. 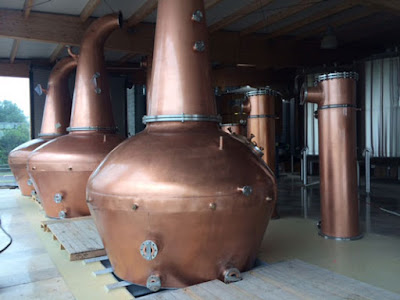 The lyne arms of the stills are yet to be connected to the condensers - they remained in a wooden casket next to the production area - and once they are, testing will commence.  Production is hoped to begin by the end of 2016.  There is also a 500 litre capacity gin still that has been installed next to the whiskey stills.

The plan is to predominantly mature the whiskey in ex-Tennessee whiskey casks, although Na Cuana are currently working on sourcing a selection of casks and barrels from wineries around the world and bodegas in Jerez, Spain.  These will be filled and stored on the site in a large cellar area that was discovered by architects during an initial survey.  This consists of three areas, which are currently home to the first delivery of casks from Tennessee. 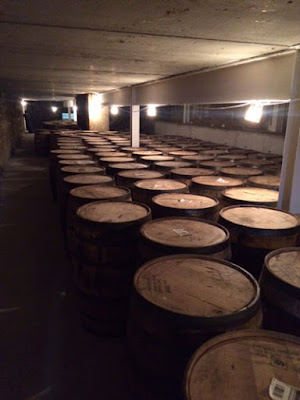 Part of the Na Cuana whiskey project is also to release a series of Irish whiskeys under The Whistler name.  The first of these - a series of three single malts at seven years old, seven years old cask strength and 10 years old - will be available from this September.  We were lucky to sample these after our visit and a full review with tasting notes will follow closer to the launch date.  All have been matured for differing times in ex-bourbon casks and ex-Oloroso sherry casks. 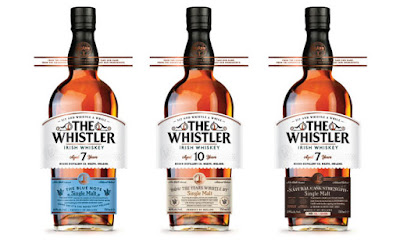 In time, whiskeys will appear under the Boann name once the distillery has been operating and stocks matured to the correct timings.  Boann is an exciting yet incomplete project but the vision, passion, drive and enthusiasm portrayed by Peter Cooney during our visit was infectious and convincing.  Boann will undoubtedly be a success, just like the family's cider, liqueur and fledgling brewery businesses are.

The only danger is about standing out from the increasingly crowded boutique Irish whiskey market, but they seem to have that covered.  Na Cuana will be entering the market with The Whistler range shortly and there seems no time constraints on the release of Boann liquid.  It is all about producing a premium product with quality not quantity to the fore.  Their meticulous attention to detail is impressive.  We cannot wait to see what they create in the future ...


All images are © of Whisky For Everyone except the images of the Cooney family, the distillery artist impression and The Whistler range - these are © of Na Cuana and the Boann Distillery.

posted by Whisky For Everyone at 10:48 PM