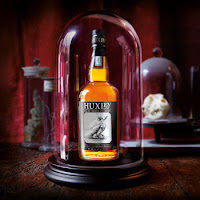 Diageo
The multi-national drinks company of Diageo has announced a third expression in its craft small-batch Whiskey Union range - the Huxley Rare Genus Whiskey.  It joins the Boxing Hares and Smoky Goat expressions, which were launched last November, and is designed to "take whiskey drinkers into uncharted territory". 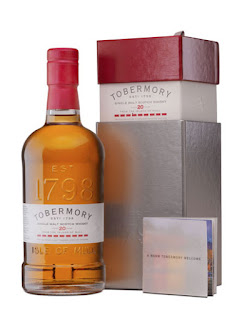 Tobermory
The Tobermory distillery on the Isle of Mull has continued its recent busy release programme with the announcement of a new limited edition series of single malts and the first two expressions in that series.  Both are released as small batches with one at 18 years old, which has been matured in ex-bourbon casks, and the other at 20 years old (pictured, left), matured in ex-sherry casks.  Both are bottled at 46.3% ABV with the recommended retail prices for each at £100 for the 18 years old and £120 for the 20 years old.

Each bottle includes a booklet with the packaging that features specially commissioned artwork by renowned local artist Angus Stewart and a tear-off tag.  This tag, along with one from each of the other five releases in the new series, will allow purchasers to be entered into a prize draw to win a bottle of the newly release Tobermory 42 years old.  This is priced at £2,500 a bottle.

posted by Whisky For Everyone at 6:48 AM

Bulkwineandspirits.com is a portal to promote trade relations between professionals and bulk wine, alcohol derivatives, and encourage business transactions between them. Bulk Tequila