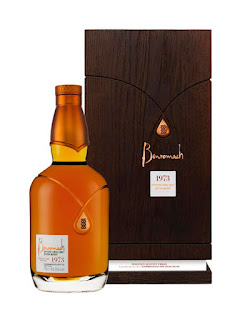 This expression was distilled in 1973 and is the latest expression in the Heritage series of rare single malts from the small Speyside distillery of Benromach. The bottling, which will be exclusive to the UK, consists of just 52 bottles that have come from a single re-fill American oak hogshead (cask #4606). The Benromach Heritage 1973 is presented in a bespoke bottle that represents the shape of the stills at Benromach and wooden casket, both adorened with copper trim.  A specially commissioned book covering the history of the Benromach distillery is also included.

Benromach is located on the outskirts of the town of Forres in the north of Speyside and was founded in 1898 under the name of Forres Distillery.  It was one of the last designed by the renowned Victorian distillery architect Charles Doig. The distillery became known as Benromach in 1919, taking the name from the nearby Romach Hills.

The current owners are Gordon & MacPhail, the large independent and family owned bottling company, who are based in nearby Elgin. They took control in 1993 and fully renovated the distillery as it had been closed for the previous 10 years. It was re-opened by Prince Charles in 1998 and the current annual production capacity is just 500,000 litres per year.

"The Benromach Heritage 1973 is to be treasured. It was crafted using many of the same skills and practises adopted at Benromach today. It’s been maturing for 42 years, and those who really take their whisky seriously will enjoy the chance to experience a little bit of Benromach history."
Keith Cruickshank - Distillery Manager at Benromach.


The Benromach Heritage 1973 has been bottled at the natural cask strength of 48.1% ABV. It is available through specialist retailers in the UK. The recommended retail price is £1,395 per bottle.

Our tasting notes
The colour is deep golden yellow with a hint of amber and the nose has a wonderful fragrance.  This combines fruity aromas (think of dried tropical fruit such as mango and pineapple, plus apricot and lychee) with sweet ones (imagine manuka honey and butterscotch).  These are supported by further aromas of biscuity malted cereals, complex wood spices and candied lemon.

On the palate the whisky feels soft and silky, but with a peppery edge.  There are immediate notes of golden syrup and fudge, plus the manuka honey from the nose, and these give that feeling of softness.  It is not long before the dried tropical fruits begin to appear - again, think of mango and pineapple in particular with a hint of peach and apricot).

The finish is long and becomes gradually drier, especially once the sweet honey-like notes and the dried tropical fruity characterisitics begin to fade.  This leaves the malt, warming wood spice and earthy notes plus a faint hint of that tobacco leaf again.

What's the verdict?
The Benromach Heritage 1973 is a wonderful whisky.  The chance to sample whiskies from my birth year do not come around very often and this one feels like a treat.  A big warming hug in the glass.  The complexity, depth and balance show just how good whiskies of this age can be with sympathetic casking.  You will have to act very quickly if you wish to buy one though with only 52 bottles available ...

This certainly is NOT for everyone!