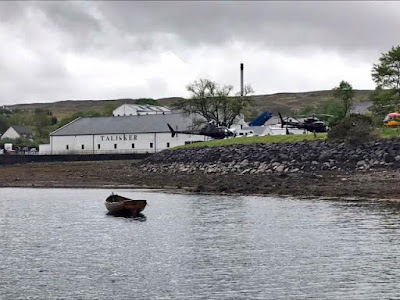 Talisker has been in constant production since 1830, apart from short periods due to rationing of barley during World War I and a fire in the 1960s, and remains the only working distillery currentkly on Skye. It is owned by Diageo produces single malt in their 'smoky category'. Much of this is used to add smoky characteristics to Diageo's extensive range of blended Scotch whiskies, including brands such as Johnnie Walker.

The remote location of the distillery presents numerous challenges for whisky production. It is away from main centres of population and transport links, and until relatively recently everything was delivered or taken from the distillery by boat. This included barley, supplies, empty casks and fuel in one direction and whisky in the other.

While it was the most functional location for the distillery when built, it is a gorgeous spot for making whisky in the modern age some 200 years later. Just a narrow road separates the distillery buildings from the sea loch and the steep hills on the opposite shore. The air is fresh and salty, and seabirds are everywhere.

Our tour of Talisker was led by Stuart Harrington, the Distillery Manager. He is from Speyside and was a former pro rugby player before starting with Diageo in one of their analysis labs. He later moved to one of their malting facilites before working at two of Diageo’s single malt distilleries in Speyside – Glendullan and Strathmill.

The first stop was the mill room, which has been home to a lovely old Porteus since the 1960s. The barley is prepared for Talisker at Diageo’s Glen Ord Maltings in the north Highlands – this sees peated and unpeated malt blended together on site to create the desired final specification. This has a phenol level of 18PPM (Phenol Parts per Million) and classed as ‘medium peat’.

The milled malt is then transferred to the large mash tun and mixed with water at 63.5°C, which is the ideal temperature to get the correct enzyme activity vs. soluble sugar extraction ratio. This water is drained and a second is added at 84°C to extract further sugars. The capacity of the mash tun is 54,000 litres and each mash takes six hours. They complete 20 mashes per week and this equates to 3.3 million litres of final new make spirit.

Talisker has eight fermentation washbacks, which are made of Oregon pine, and each has a 53,000 litre capacity. The fermentation time is 65 hours and this helps to develop extra fruity and citrus notes in the final wash liquid – this is around 7% ABV once the process is completed. They normally use liquid yeast, which is added to the wort (the sugary liquid produced during mashing) as it is transported to the washbacks. However, due to a pumping issue they were using dried yeast at the time of our visit, which was being manually added.


Talisker is slightly unusual as it has an odd number of stills. Most distilleries have an even number as the stills tend to work in pairs. However, here there are two wash stills for the first distillation and three spirit stills for the second. Each wash still has a capacity of 14,700 litres and each spirit still a capacity of 11,000 litres. They are all manufactured by Abercrombie’s and the total annual new make spirit output is currently 3.3 million litres.


Another unusual production feature at Talisker is the use of wormtub condensers. There are very few distilleries in Scotland where this traditional method and equipment is used. A wormtub is a hollow and spiraled copper tube that is immersed in a large vat of cold water. In Talisker’s case the vat is made out of Scottish larch.

As the spirit vapours hit the cold copper and move down the tube, they are condensed back to liquid form and then collected. This method is more time consuming but gives the spirit more contact with the copper, which in turn helps to purify the spirit further. Talisker has five wormtubs, one for each still, and each uses 50,000 litres of water per hour. This water is constantly recycled as it is warmed by the alcohol vapours.


There are three dunnage warehouses on the site and these hold about 5,000 casks. Most Talisker spirit is taken off the island by tanker and is then filled to cask and matured on the mainland. The evaporation, otherwise known as ‘the angel’s share’ is low at Talisker due to the local climate and comes in at approximately 0.5% per year. Talisker is generally matured in re-fill casks and mostly in American oak, although a small percentage is put in to European oak.

Our tour was completed with a tasting of some of Talisker’s extensive range of single malts, which was hosted by Ewan Gunn, the Global Scotch Whisky Master at Diageo.  Expressions sampled were the 10 years old, Skye, Distiller's Edition, 18 years old and the Distillery Exclusive – there are only 6,000 bottles and they are only available for purchase at the distillery shop. The sound of heavy rain on the tasting room window just added to the experience.

Talisker has long been one of our favourite single malts – the classic 10 years old expression was one of the whiskies that got us interested in whisky. We have always wanted to visit the distillery on Skye and it did not disappoint. We were amazed as to how busy the visitor centre was given its remote location. It is an evocative place. You can really feel how Talisker whisky becomes what it is from the surrounding environment – rugged, salty, robust - once you have visited.

posted by Whisky For Everyone at 5:10 PM