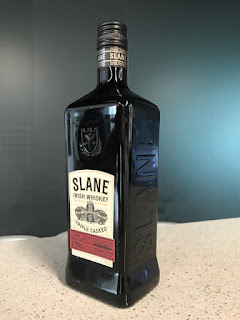 This whiskey is the first to be launched from the new Slane Distillery in Ireland. This is located on the grounds of the famous Slane Castle, which is renowned for music concerts and its setting within the Boyne Valley. The distillery itself is yet to commence production, which is anticipated from late Summer 2017, so this first release showcases the complex flavour to be expected from the triple cask maturation used. Blending whiskey from virgin American oak, seasoned American oak and ex-Oloroso sherry casks, this expression is created to be a more complex, yet smooth, Irish whiskey. It has been bottled at 40% ABV.


The Slane distillery is owned by Brown-Forman, the American drinks company who also own Jack Daniel's, Woodford Reserve and Old Forester along with a selection of other spirit and wine brands. The distillery and whiskey have been created by Brown Forman and working alongside the Conyngham family, owners of Slane Castle, as a premium examples of the new wave of Irish whiskey production.

Our tasting notes
On the nose this whiskey is quite robust with pronounced oak spice, rich fruity notes (especially dark dried fruits like raisins and currants), butterscotch, earthy spices (ginger in particular) and vanilla. Underlying this is a soft creamy tone that promises greater depth.

The creamy characteristic of Irish whiskey hits you upfront alongside a distinct caramelised peach sweetness with oak and vanilla. Further notes of dark dried fruits (raisins again) and warm baking spices add depth. There are hints of black treacle, marzipan and milk chocolate in the background. With time the whiskey develops in dryness and becomes slightly more savoury. The finish can definitely be described as drying as well as loaded with earthy spices, but through this it holds a hint of sweetness to bring in balance.

What's the verdict?
This is a characterful whiskey that is richer than most other Irish whiskies on the market, due to the treacle and caramel notes and uniquely dry finish. Its robustness, alongside the creaminess, would lend this whiskey well to not only drinking straight, or with ice or water. It would also stand up well in a cocktail, making it a very versatile whiskey. Due to limited supply, Slane is currently only available in Ireland, the UK, Australia and selected US states for around £30.

posted by Whisky For Everyone at 4:25 PM

I first tasted Slane about a year ago a really enjoyed until recently when I bought two bottles of Slane from Dublin airport. They definitely didn’t taste as good as previous bottles and was just wondering if Slane changed their recipe or just sent out better whiskey in their first batch....has anybody had the same experience??