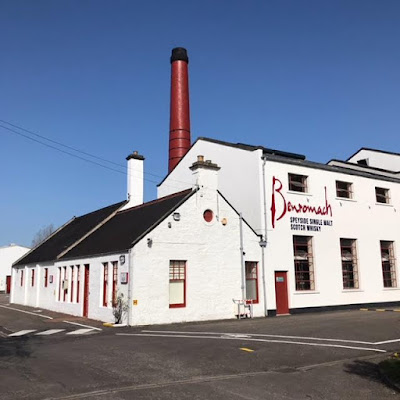 It was also a delight to spend the morning with Keith, an experienced whisky maker who joined Benromach in 1998 when it began production once again. Shortly afterwards, he became the Distillery Manager in 2000 and has held the position ever since. He is Benromach through and through.


When independent bottling company Gordon & MacPhail took over Benromach in the mid-1990s there was little remaining of the distillery apart from the four walls and a good water supply. All the equipment had been sold off to various places. This apparent negative was quickly turned in to a positive as it was seen as presenting a clean slate – now G&M could decide on the style of whisky that they wanted to make.

“We looked back at the historical ‘old style’ of Speyside whisky from the 1950s and 1960s,” Keith tells me, “these used local barley and local peat to dry the malt, which is softer and gentler than peat from Islay. We then selected the type of equipment and working practices to fit that.”

Back in the day, Benromach was used in blends and it was a key ingredient in the Antiquary range of whiskies. Now most is used for the distillery’s growing single malt range. When the distillery restarted it was producing just 135,000 litres per year. Now that has grown to an average of 380,000 litres per year. As a result there has been some significant expansion on site since 1998, mainly in the form of five new warehouses and a visitor centre.


They are currently using Concerto barley and organic Concerto for making their limited organic single malt. This gives Keith the high yield that he requires and 20 tonnes are delivered to the distillery each week. This is then ground in a re-conditioned 105-year old Boby Mill, which is the smallest I can remember seeing in Scotland. This processes one tonne of malt per hour.

Benromach currently operates on a five-day week and 14 mashes are completed in this time. Each mash contains 1.5 tonnes of grist and three different temperatures of water are added and drained off to extract the maximum amount of soluble sugars – these are at 64.5°C and then 78°C and 90°C.


Walking across from the mash tun, there are four European larch washbacks. Nine further ones have been added elsewhere as production demands have increased and this allows them to deal with the 14 mashes per week. Each mash is six hours apart – it is then filled to a washback and powdered distiller’s yeast added – so by the time the first mash of the week has fermented, the last is ready to replace it.

Each washback produces 7,500 litres of wash with an alcoholic strength of around 8% ABV. The fermentation time ranges from 65 to 115 hours, depending on the time of the week – the washes from the early part of the week are towards the lower end of the scale, while those from the latter part sit for a longer time over the weekend when no one is working.


The stills sit opposite the four washbacks. The wash stills take each 7,500 batch of wash and distil it to make low wines of 23% ABV. These are then distilled a second time through the spirit stills, which have a capacity of 4,500 litres to produce the final new make spirit. The stills are small and onion-shaped.

“This allows for a cooler and slower distillation,” Keith explains, “which in turn allows more copper contact with vapours and spirits while also allowing medium and heavier alcohols to rise up and travel down the lyne arm to be re-condensed.”

Every run of the spirit stills yields 900 litres of new make and this has an average strength of 69% ABV. This is reduced to 63% before it is filled to cask. The majority of the casks filled at Benromach (around 70%) are European oak ex-sherry casks. The remainder are American oak ex-bourbon casks, plus a small percentage of other cask types such as ex-red wine or ex-dessert wine.


The casks are all filled on the site (around 56 casks a week and 2,500 per year) and matured in one of the five dunnage-style warehouses. Currently there are approximately 13,000 casks of whisky maturing within these. Two further warehouses are planned at the distillery in 2019, which is another sign of the growing popularity of Benromach.

The distillery has a compact feel with the mash tun, washbacks and stills all housed in one room. It feels like one of the best places to visit and learn about the whisky production process as it can be easily explained and seen with the simple layout. To compliment this, everything is hand crafted and every part of the process uses the traditional whisky making skills that are sadly becoming more rare.

“Everything is manual at Benromach,” Keith tells me, “this means each staff member needs to understand the processes and run things by themselves. They need to know the sights, sounds and ‘feel’ of the distillery. If something is not right, then we need them to instinctively know.”

In a time when technology seems to be taking over our lives and so many industries, not just whisky making, it is refreshing to see a place that still champions and relies on the traditional skills of those that work there. It simply adds to the charm of Benromach and their lovely range of whiskies.

I would like to give a personal huge thank you to Keith for the time taken out of his schedule to show me around and share so much information about the distillery, its practices and his time there. It was an absolute pleasure.

I would also like to thank the distillery team for the warm welcome offered, especially Kirsty Saville and Georgia Wilson - the Benromach Brand Manager and Marketing Assistant respectively, who accompanied Keith and myself around on the tour.

posted by Whisky For Everyone at 1:32 PM