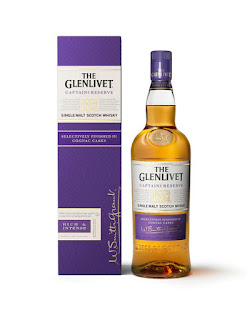 The Captain's Reserve is a new single malt from the famous Speyside distillery of The Glenlivet. The new expression has been finished in ex-Cognac casks and honours Captain William Smith Grant, the great grandson of The Glenlivet's founder George Smith, who fought in France during the First World War. It is initially matured in first-fill ex-sherry casks made from American oak. It joins numerous expressions in the core range, including the Founder's Reserve and recently re-introduced 12 years old, but also designed to show the versatility of the Glenlivet spirit and the experimentation happening at the distillery.

The Glenlivet distillery is located in the foothills of the Cairngorm mountains, close to the village of Ballindalloch in the Speyside region of Scotland. It is named after the Livet Glen in which it sits and was founded in 1824 by George Smith, whose signature still appears on the labels and packaging. The distillery was the first in the Speyside to be granted a distilling license under the new Parliamentary Excise Act, which was written in 1823.

The Glenlivet is now one of Scotland's largest distilleries with an annual production of over 10 million litres, which will increase very soon due to the completion of a planned expansion. It is currently owned by Pernod Ricard, who took control in 2001, and is one of the best selling Scotch single malt brands. The Glenlivet regularly battles with Glenfiddich for the number one spot.

Our tasting notes
The colour is deep golden yellow, almost amber, and the nose has initial aromas of green apple, golden syrup and dark dried fruits. These are particularly reminiscent of prunes with some currant, raisin and fig also evident. There are also aromas of burnt cereals, plasticine and a hint of treacle.

On the palate this whisky has an immediate sweetness that is led by the dark dried fruits and sweeter elements from the nose. The note of prune is prominent and backed up by raisins and figs again, with a hint of candied bitter orange peel. The sweetness is driven by notes of golden syrup and honey with an element of fudge or toffee in the background. Underneath is some crisp green apple and stewed pear, along with a pinch of earthy wood spices (think of cinnamon and all-spice especially) and cocoa powder. Late notes of white chocolate and a hint of liquorice/aniseed round things off.

The finish is quite short, especially once the sweetness and dried fruitiness fades. The earthy wood spices remain and there is a pleasant dryness that has a warmth and a peppery bite (imagine white pepper) to it.

What's the verdict?
There are not too many whiskies that we can think of that are matured in ex-Cognac casks so it is a bold step by a leading brand such as The Glenlivet to put one in their core range. The Captain's Reserve is a pleasing result with a nice sweetness, warmth and feel to it.

This single malt is also dangerously easy to drink but not the most complicated. It is good to drink a whisky like that sometimes. The short finish is a little disappointing but had the effect of us wanting to pour ourselves another glass straight away ...