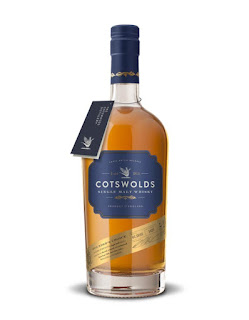 This whisky is the first ever cask strength single malt to be released by the Cotswolds distillery in south western England. It was bottled in October 2018 and has been matured in STR (shaved, toasted and re-charred) casks made from American oak. These had previously been seasoned with red wine and were coopered in Portugal. Just nine were selected for this release and there are just 3,000 bottles available. It is non chill-filtered, of natural colour and bottled at the cask strength of 60.9% ABV. A bottle will cost £65 and is available in selected specialist whisky retailers and via the company's website www.cotswoldsdistillery.com.

The Cotswolds distillery is located in the village of Stourton and was founded in 2014 by Daniel Szor. The company ethos is to only use barley grown on Cotswold farms and filtered water from the village supply. This barley is then malted at a local maltsters in the nearby town of Warminster. Both whisky and gin (which has gone on to gain many accolades) are produced, along with a range of liqueurs. The distillery run tours daily and cost between £6 and £10, depending on the tour chosen. They also have a shop and tasting room on site.

“Our single malt is the culmination of years of hard work. We have managed to produce something truly remarkable, and we couldn’t be prouder of what we have achieved.”
Daniel Szor - Founder and CEO of Cotswolds Distillery.


Our tasting notes
The colour is golden yellow and the nose has a lovely set of fresh and vibrant aromas. First comes lemon zest, peach, green apple and fresh coconut, which are followed by golden syrup and plenty of vanilla. Then comes a delicious aroma of plum brandy with a hint of wood shavings, gingerbread, cinnamon and cocoa powder.

On the palate this whisky is initially peppery and hot, mostly down to the high ABV strength. Once it settles in the mouth there is an extraordinary blast of sweet tropical fruit notes - think of dried mango, pineapple, tinned peaches and lychee especially. These are supported by further sweet notes of golden syrup, toffee, vanilla, prunes and milk chocolate. Underneath there is a bittersweet malty note and crisp green apple, although this becomes more confected and tends towards boiled apple or peardrop sweets with time. The peppery characteristic balances this sweetness, as do some warming spices (fresh oak shavings, cinnamon and clove) and pinches of ginger powder and cocoa.

The finish begins with the sweet elements dominating but these fade quickly and leave a much drier and warming edge to the whisky. Here the bittersweet maltiness really comes in to its own, along with the spicier notes. A late hint of white chocolate rounds things off nicely.

What's the verdict?
The Founder's Choice follows shortly on the heels of the debut single malt release, which we are yet to try but that will be the distillery's flagship product. If this is anything to go by then they are on to a winner. Their gin has already won plenty of awards and the whisky will surely follow.

OK, the whisky is clearly young but it is one of the better early release products of its type that we have sampled for a while. It will be very interesting to see how the whisky develops with further age or in different styles of cask. Very promising.