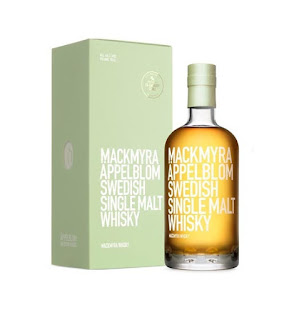 The Mackmyra Äppelblom is a recent limited edition single malt from Sweden's leading whisky distillery. The name Äppelblom is Swedish for 'apple blossom' and this is a reference to the rare casks used during the final part of maturation. These have previously held Calvados, the famous French apple spirit, from one of France's most renowned producers - Cristian Drouin. Prior to this the whisky had been maturing in American oak ex-bourbon casks. Äppelblom has been created by Angela D'Orazio, the Master Blender at Mackmyra.

Mackmyra was founded in 1999 by a group of friends who decided to build Sweden's first single malt distillery whilst on a skiing trip. The distillery was originally small and was replaced in 2012 by a new eco-friendly distillery in the town of Gävle. This state-of-the-art distillery is 37 metres high, cost an estimated £50 million to build and uses gravity during production - simplistically, malted barley is fed in the top and new make spirit comes out of the bottom. The annual production capacity is approximately 525,000 litres.

The Mackmyra Äppelblom has been bottled at 46.1% ABV and is non chill-filtered and of natural colour. It is still available in selected specialist retailers and a bottle should cost around the £48-50 mark.

Our tasting notes
The colour is golden yellow and the nose has a richness, sweetness and fruitiness to it. Aromas of vanilla and golden syrup are backed up by cooked apple and a hint of pear. With time further hints of warming oak spice and cinnamon evolve, as does an aroma of butterscotch.

On the palate this whisky has a lovely soft and velvety feel. Butterscotch and vanilla are the immediate notes, followed by crumbly brown sugar and some golden syrup. Then comes the distinct apple notes from the ex-Calvados cask, which has a mix of dried apple and concentrated apple juice to it. The combination of all of these elements is reminiscent of tarte tatin, that famous French apple dessert. In addition there are hints of honeycomb, cinnamon, gingerbread and a twist of lemon peel.

The finish is of decent length with oak spice, cinnamon and gingerbread lingering and adding a pleasant warmth and dryness. The sweeter notes and apple characteristics slowly fade and the overall experience is delicious.

What's the verdict?
A number of experimental Mackmyras have appeared over the last couple years. We have not tried many and having heard mixed reviews, so were intrigued about how the Äppelblom would be. And what a treat - a delicious and vibrant single malt that has a set of wonderful charcateristics at play with each other. The sweetness and warming spiciness mingle so well with the juicy apple notes. A divine whisky and one you should try before it is all gone.