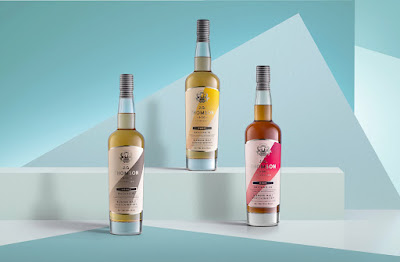 These three whiskies form part of the core range of spirits from J & G Thomson & Co. - an experimental new Scottish bottling company based out of Edinburgh. Their goal is to bring characterful spirits from high quality casks to a wider audience. As well as the three whiskies, the core range features a gin and a rum. Despite only recently being launched, the bottlings have already collected some top awards at UK spirits competitions. All are produced in small batches and are bottled at 46% ABV.

Another goal is to keep things simple and aid consumers with their choices. This can be seen in the naming and labelling - the three whiskies are simply titled Smoky, Sweet and Rich. The aim is to guide drinkers towards their preferred flavour profile with the three exhibiting peaty, bourbon cask and sherry cask characteristics respectively. The other two products follow this - Bold Jamaican Rum and Citrus Dry Gin. Each whisky will reail for £42.50.

The three whiskies are all blended malts. These are released as non chill-filtered and of natural colour. They will be joined by occasional limited editions. The first two of these are the 23 years old blended malt, featuring only Speyside single malts, and the 1972 blended grain, featuring different single grains from different distilleries that were all filled to cask in 1972.

J & G Thomson & Co. has been founded by The Artisanal Spirits Company. They also own the renowned Scotch Malt Whisky Society. They are one of the world's largest suppliers of single cask and small batch Scotch whisky and spirits. The new venture is inspired by wine and spirits merchant J. G. Thomson, who operated in Leith during the 18th century.

Thomson traded and bottled imported wines and spirits that were arriving in to the port of Leith. He did the same for local Scotch whiskies. He then sold them on to discerning drinkers in Edinburgh, London and beyond. Leith was a vibrant port and has much heritage with wine and spirits. The Artisanal Spirits Company offices are located in the exact building used by Thomson in the 1700s. 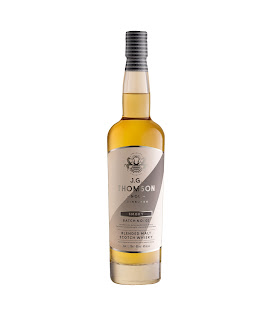 Smoky Blended Malt / Batch No:01
This whisky is made using only single malts from Islay. These have been matured in a combination of ex-bourbon hogsheads and American oak ex-Pedro Ximenez sherry butts and hogsheads.
The colour is pale gold and a blast of vibrant peat welcomes you on the nose. Aromas of hot bonfire ash and damp seaweed mingle with damp moss and a hint of tar. Some sweetness battles through in the form of runny honey and white chocolate.  Finally, black pepper and clove.
On the palate this whisky also packs a peaty punch. It feels oily, mouth coating and peppery. Notes of ash, charcoal, seaweed and damp earth dominate and are joined by further notes of burnt cookies, surgical bandage and hot tar. Honey, white chocolate and juicy sultanas add some evolving sweetness. A hint of tropical fruit adds further interest. Warming spices then take over with clove, liquorice root and all-spice present. The ash and ember-like feel rises again on the finish, which actually feels ashy as it gets drier and drier. 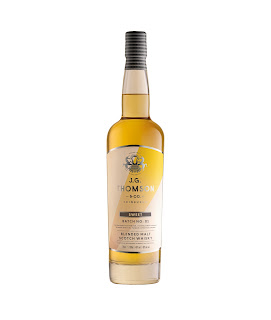 Sweet Blended Malt / Batch No:01
A whisky made up of single malts from the Highland and Speyside regions. They have been matured in ex-bourbon barrels with differing char and toast levels - heavily toasted, medium and heavily charred.
The colour is golden yellow and the nose is uplifting and vibrant. Aromas of honey and vanilla rise first, followed by white chocolate and green apple. Underneath are further aromas of warming baking spices, cocoa powder, coconut and marzipan.
On the palate this whisky feels creamy and silky. Distinct fresh oak notes strike initially but evolve to become vanilla, fudge and fresh honeycomb. Creamed coconut and white chocolate also develop, alongside crisp green apple and malted biscuits. Then those spices from the nose begin to strengthen - think of cinnamon, cardomom and clove especially - and these are backed up by hints of apricot jam, cocoa and gingerbread. These add depth and complexity. Final notes of freshly baked cookies and lemon zest round things off. 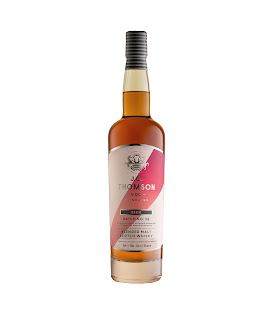 Rich Blended Malt / Batch No:01
This whisky is constructed using single malts from the Highlands and Speyside. They have all been matured in ex-Oloroso or Pedro Ximenez sherry casks of varying sizes, and made of either American or Spanish oak. Sizes include butts, hogsheads and quarter casks.

The colour is deep golden amber and the nose is decadent with plenty of dried fruit aromas - think of raisin, sultana and fig especially, plus candied orange peel. These are joined by caramel, milk chocolate (or is it mocha?), baking spices and a hint of black treacle or molasses.

On the palate this whisky feels viscous and oily with plenty of sweetness upfront. Caramel and treacle notes lead the way and are heavily supported by the collection of dried fruit characteristics from the nose. Dark dried fruits such as raisin, sultana and fig mingle with citrus peel (especially orange and grapefruit). Heavy wood and baking spices develop - imagine cinnamon, mace and cassia bark with hints of clove and star anise. The finish becomes surprisingly dry, savoury and woody with a distinct charred oaky vibe coming through.