Whisky Live is an event that showcases the diverse world of whisky to the general public. The phenomena has spread around the globe and annual shows are now held in locations such as North America, China, India, Australia, New Zealand, South Africa and across mainland Europe. Whisky Live has two events in the UK - one in London and the other in Glasgow. They are the biggest whisky shows in the UK and this year's London show was held over last weekend. 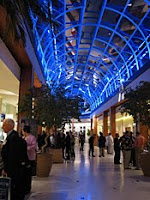 The venue was the Hurlingham Club, a prestigious members only club on the leafy banks of the River Thames (it's very posh and remains the only place that we have ever seen anyone playing croquet!) and this year's event marked the 10th anniversary of Whisky Live in London. We were both in attendance for both days of the show - Matt doing his 'day job' selling whisky to people and Karen doing her 'favourite hobby' ... drinking whisky! Between us, we sampled plenty of whisky and decided to split the reviews in to two parts. Many exhibitors use Whisky Live as a platform to showcase forthcoming releases so in this first part, we are concentrating on these new releases and other special Whisky Live bottlings that were on offer. A second part that reviews the other whiskies sampled will follow shortly.

Compass Box DecadenceCompass Box is a boutique whisky producer who buy casks and then blend them to create their own unique range of whiskies. Decadence is a very limited release that was created especially for Whisky Live and to celebrate Compass Box's 10th anniversary (Decade-nce ... do you get it?). Only 15 litres was produced (a lot of which was consumed the night before at a gala dinner, by the sounds of it!) and it was only available to sample. No bottles will be released. It has a high grain whisky content (around 60%) and this comes through on a rich nose that is packed with cereals and sweet vanilla. This carries through to the palate which has sweet caramel, dried fruits (think of sultanas and peel), a herbal grassy note (imagine dried grasses) and spicy cinnamon. The finish is long, rich and slightly peppery. Lovely stuff. Evan Williams 10 years old Whisky Live Special
A special Whisky Live edition of just 162 bottles. Evan Williams is an American bourbon that is currently made at the Heaven Hill distillery in Kentucky. It is produced using one of the oldest bourbon recipes in existence and was started by Welsh settler Evan Williams in 1783. This show release costs £45, is bottled from a single cask and is cask strength (a whopping 63.9% ABV!). The nose is powerful and full of rich vanilla, coconut and oranges. On the palate, this is rounded and very big - there is plenty of those elements from the nose and these are joined by some bitter cereal notes and woody spice (think of cinnamon especially). The finish is long, drying and aromatic. Adding water softens things and makes it easier to drink, with the sweetness becoming more caramel-like and the orange becoming more prominent (imagine marmalade). Lovely, rich and spicy whisky.

Glen Moray Port Wood
This whisky is a new limited release from the much under rated Speyside distillery of Glen Moray (OK, it was released just before Christmas but who is counting?). It is bottled at 56.7% ABV and has been matured for 13 years in ex-bourbon casks before having a year in a Port cask. Only 725 bottles are available and they cost £50 each. The nose is rich and sumptuous with a lovely mix of caramel, stewed fruits (imagine plums and apples) and woody spice (nutmeg and cinnamon bark). On the palate, the whisky is well balanced and easy drinking considering the cask strength ABV. The caramel, stewed fruits and spices are still there but it feels more sugary with a peppery edge. Some nuts (think of hazelnuts) come through on the long, rich finish. An excellent dram. Well worth a try if you can get your hands on some.

Hakushu Heavily Peated
This Japanese whisky is not being released until June, so it was a real treat to get to sample it. Hakushu means 'forest distillery' in Japanese and it is located on a forest plateau directly west of Tokyo. This limited edition is the peatiest Hakushu to date (the regular 12 years old has a hint of peatiness to it). The colour is light and the nose is fragrant and potent - there is obvious earthy peat smoke backed up by some lovely caramel, fresh green fruits (think of pears and apples), dried grass and a whiff of citrus (lemon zest especially). The palate is firstly hit with tangy peat smoke (imagine damp moss and twigs) and then the caramel, fruit, grass and citrus from the nose. There is also subtle cereals and some spice (think of peppercorns and nutmeg). The finish is long with the slightly bitter smoke building up and lingering for ages. 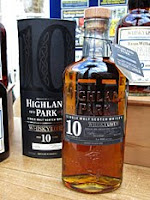 Highland Park 10 years old Whisky Live Special
Another exclusive bottling and it was released to commemorate the 10th anniversary of the London Whisky Live show. This offering from the Highland Park distillery on the Orkney islands consisted of just 600 bottles, is 59.3% ABV cask strength and was specially selected by eminent whisky writer Dave Broom. This whisky has a deep amber colour and a lovely fragrant nose that is packed with dried fruit (think of raisins and sultanas), caramel and soft sweet peat smoke. On the palate, this is impressive with soft, slightly bitter smoke mixing with the sweeter dried fruit and caramel elements. There is also some candied orange peel, brown sugar, peppery spice and heather present. The finish is long and enjoyable. Adding water, softened the spices and made it more buttery and toffee-like. A fantastic dram worthy of an anniversary. 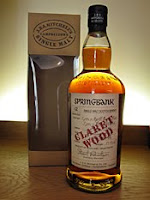 Springbank 12 years old Claret WoodThis whisky was making its first ever appearance to the general public, as it is not to be released for another month or so. Springbank bottled some especially for Whisky Live. Springbank is a distillery located on the Campbeltown peninsula in western Scotland and has a cult following around the world. This release will consist of 9360 bottles, is bottled at 54.4% ABV and has matured for 9 years in ex-bourbon casks before transferring to French Claret wine casks for 3 years. The colour is amber with a reddish hue and the nose is rich and fruity. The palate is fresh, smooth and sweet with plenty of juicy red fruit (think of red berries and plums) underpinned by vanilla, caramel and wood spice notes (imagine cinnamon and nutmeg). The finish is drier, spicier (more nutmeg) and very enjoyable. A staff favourite among those on The Whisky Shop stand.

Tomatin 21 years oldTomatin is a little known but well regarded distillery that lies in the foot hills of the Grampian mountains to the south of Inverness. The brand has undergone a major revamp over the last year and this limited edition will briefly join its new look range. This 21 years old has yet to be released, is bottled at 52% ABV and is restricted to 2500 bottles. The nose has an interesting combination of aromas - vanilla, cereal grains, dried grass and a whiff of earthy ginger. On the palate, this feels creamy and velvety with vanilla and cereals mixing well with a distinct nutty note (think of a creamy nut like almond or hazelnut). Then comes dried grass and some nutmeg spice with just a hint of that ginger again. The finish is lovely and soft with the the nutty note prominent and reminiscent of hazelnut praline. A top quality and well made dram.

Tomatin 25 years old Another new addition to the Tomatin range that replaces the old 25 years old. It has new packaging and a slightly different combination of casking. The nose is vibrant and stunning with a great combination of vanilla, cereals and prominent tropical fruits (think of coconut, peach and mango). On the palate, this is creamy and fresh ( a hard thing to achieve in older whiskies) with the almost exaggerated aromas of the nose becoming more subtle and understated. All the 'nose' elements are there - vanilla, cereals, coconut, peach, mango - and these combine beautifully with some ginger and nutmeg spice. The finish is lovely but slightly short. This dram is enjoyable and very, very good.

Yamazaki Puncheon Cask
Another Japanese whisky from the Suntory company (Hakushu is owned by them as well) and this is also due for a limited release in June - only 3000 bottles, according to the chap on the stand. Yamazaki is Japan's oldest distillery, having opened in 1923 and continues to win accolades for their innovative approach and whiskies. This has been matured in huge Puncheon bourbon casks and the nose is aromatic but delicate. There is a wonderful mix of cereal grains, vanilla, coconut and a hint of cocoa. The palate is just as delicate but vibrant and fresh, with the creamy vanilla and coconut prominent. To this, add some more cereals, a citric tang (think of lemon zest), sweet crumbly brown sugar and that hint of cocoa again. The finish is fresh and tangy, becoming dry towards the end. An excellent whisky and a real star of the show!
posted by Matt C at 9:49 PM

Sounds like a good time. What sort of entrance fee/cost per tasting do they have? I'm amazed how much that can vary from one event to the next, from free to $5+ per taster.

sounds great!
too bad i missed it. at least Kfir did
we have the HP 10, so i will taste it with kfir when he comes back!

This sounds like a much better lineup than they had at Whisky Live Glasgow at the end of last summer. I did get to taste the entire Springbank range, which was very nice, but the variety here, and the inclusion of the Japanese malts, looks quite special.

Glad you had a good time (even while 'working'!).

Hi guys, was great to see you both there. Glad to see you found time to find some of the more interesting drams on offer!