Arran - Celebrate in style
The Isle of Arran distillery is to host a series of events at the end of this month to celebrate its 18th birthday.  The main event will take place on Saturday June 29, which is 18 years to the day since the first spirit flowed off the still in 1995.  This will be book-ended by two further events on the Friday and Sunday.

The theme of the festivities is 'Malt & Music'.  There is a special gala dinner in one of the warehouses on Friday June 28 for which just 40 tickets (£95 per head) are available, the 'main event' is a music festival at the distillery featuring local bands on Saturday, which is followed by a hog roast on Sunday.  There will also be activities such as tutored tastings, the chance to meet distillery workers and guided tours of the distillery throughout the celebration weekend.  For further information and to purchase gala dinner tickets, please pay a visit to www.arranevents.com.

Auchentoshan - New packaging
The Lowland distillery has announced a 'refresh' of the packaging for its 12 years old and Three Wood (pictured, left) expressions.  The new designs remain true to the old packaging but has been created to offer clearer and more concise information, and to stand out better on retail shelving.  A series of illustrations have been included to tell the story of Auchentoshan whisky, their unique triple distillation process and the distillery's heritage dating back to 1823.

Jennifer Meenan, the Auchentoshan Brand Manager says, “We are delighted with the new design and feel it will provide consumers with a greater understanding of how we make our whisky and how it will taste. The introduction of illustrations on the pack is new for Auchentoshan and we feel it brings to life the story of this wonderful triple distilled single malt whisky”.

Paul John - Two new bottlings released
The up and coming Indian single malt brand of Paul John, which is distilled in the southern city of Goa, have announced two further releases - Brilliance and Edited.  These follow on from their award winning first release, which caught the attention of commentators and writers, including Jim Murray amongst others.

Both whiskies are distilled in copper pot stills, are around the four/five year old mark and are bottled at 46% ABV.  They are to form a core range, which will be interspersed with single cask or limited releases.  The Brilliance is made from unpeated Indian malted barley and matured in American oak ex-bourbon casks.  The Edited is made from a combination of unpeated and peated Indian malted barley, and is again matured in American oak ex-bourbon casks.

Both are exclusively available from The Whisky Exchange in the UK, priced at £38.49 for the Brilliance and £42.49 for the Edited.  Further information can also be found at www.pauljohnwhisky.com. 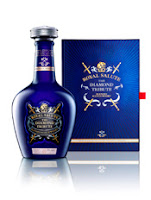 Royal Salute -  Coronation bottling announced
The premium blended Scotch brand of Royal Salute has announced a new bottling to commemorate the 60th anniversary of the Queen's Coronation.  The Royal Salute also celebrates 60 years, as it was originally blended and released in June 1953 to mark the Coronation ceremony.  Ever since it has been bottled in one of three coloured ceramic bottles - emerald, ruby and sapphire - which signify the three coloured gem stones in the Imperial State Crown worn by the Queen at the ceremony.

The new bottling, named The Diamond Tribute, will sit permanently in the Royal Salute range and has been created by Colin Scott, the Master Blender for the brand.  As with the regular bottlings, the minimum age of whisky used is 21 years old.  It will be available worldwide from July and will retail at a recommended price of £175/$270 USD a bottle.

Christian Porta, the CEO of Chivas Brothers, commented “It is appropriate for Royal Salute to mark the anniversary of Queen Elizabeth II’s coronation with the introduction of The Diamond Tribute. It is a distinctive whisky that befits the traditions and values of Royal Salute; combining age and craftsmanship to create a Scotch whisky of finesse and rich complexity.”

posted by Whisky For Everyone at 7:41 PM