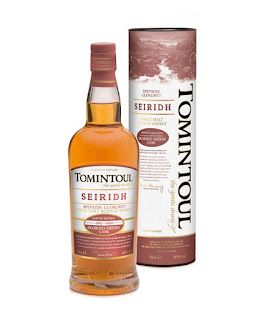 This whisky is a limited edition single malt from the Speyside distillery of Tomintoul. The Seiridh, which translates as 'sherry' from Scottish Gaelic and is pronounced 'sheh-ree', is a no age statement whisky that has seen initial maturation in American oak ex-bourbon casks from Kentucky, USA before being transferred to first-fill ex-Oloroso sherry butts for a finishing period. These ex-sherry casks were hand selected for the release by Robert Fleming, the Master Distiller for Tomintoul, from a family-owned bodega in Jerez, Spain. In this first batch there are just 6,000 bottles and each is individually numbered. The Tomintoul Seiridh is bottled at 40% ABV and is available in selected specialist retailers. A bottle should cost arounf the £32-35 mark.
Tomintoul was opened in 1965 by owners Hay & Macleod & Co. and W & S. Strong & Co. They founded the Tomintoul Distillery Ltd. and was designed to cash in on the whisky boom that happened during the 1960s. It is located in the hamlet of Tomintoul, close to the village of Ballindalloch, and is one of the highest in Scotland at 286 metres/ 808 feet above sea level. This leads to the distillery being one of the worst to be effected by bad weather and it is regularly cut off by heavy snow fall in winter.
The current owners are Angus Dundee Distillers, who took over in 2000, and it is under their ownership that Tomintoul has really developed and grown as a single malt brand. The current production capacity is 3.3 million litres per year and the core range features an extensive range of products in the classic Speyside, lightly and heavily peated styles. These are named as Tomintoul, Peaty Tang and Old Ballantruan respectively.
Our tasting notes
The colour is deep gold with a hint of amber. The nose has a lovely soft and sweet aroma - this begins with soft, crumbly brown sugar and develops in to honey and sultanas. Then come further subdued aromas of caramel, toffee and candied orange peel with a background pinch of baking spices (think of cinnamon and all-spice especially).
On the palate this whisky has a nice mixture of initial rich and juicy notes - these manifest themselves as caramel, toffee and manuka honey combined with plump sultanas, raisins and plenty of candied peel. This is predominantly orange but there are also hints of lemon and lime too. Underneath these obvious characteristics are more subtle notes - imagine malty cereals, chopped nuts (especially hazelnut and walnut) and a heavy pinch of those baking spices from the nose. There is cinnamon and all-spice again but with further hints of clove powder, nutmeg and mace. Everything feels warming, rich and rounded.
The finish sees the sweetness escalate, especially once the malty and warming spicy notes begin to fade. The honey and caramel lead the way with the juicy dried fruits never far behind.
What's the verdict?
The Tomintoul Seiridh is a fabulous whisky that gives plenty, especially considering the price. Having not tried much from this distillery the whisky makes us want to try more. It seems under rated and should be known to a wider audience. The whisky feels way more luxurious than its price tag would suggest and has a great depth of richness and flavour than you may expect from a no age statement single malt. Grab one while you can. You will not regret it.
Also, Matt recently reviewed this whisky as part of our ongoing Allotment Dram series on Youtube. Click below to watch. Subscribe now to keep up to date with future videos and to watch 50+ videos incuding whisky tasting, distillery visits and lots of other whisky related stuff.
posted by Matt C at 4:54 PM