The Buchanan's whisky brand is one of the famous old names of the Scotch whisky industry.  It is part of Diageo's extensive blended whisky range, which totals around 80 different brands, and has a particular stronghold in the South America.  Within this, the main markets are Argentina, Brazil, Columbia, Mexico and Venezuela.  It is also the fastest growing Scotch whisky brand in the USA, as the Hispanic population are introducing it from the established markets.

The brand was established by a man named James Buchanan.  He was actually born in Canada but had Scottish parents, who returned to the UK shortly after he was born.  Buchanan spent his early working life in the grain business before moving to London as a whisky salesman.  He soon noticed that there was room in the market for a new, affordable whisky and set about creating it himself.  The Buchanan Blend appeared shortly after and in 1884 he set up James Buchanan & Co.

The blend was a huge success and made him a very rich man, who he also gained a Royal Warrant from Queen Victoria to supply his whisky to the Royal Household.  The company joined the Distillers Company Limited in 1925, which through time has evolved in to Diageo. Of particular interest is the question of how Buchanan's whisky became so popular in South America.  Apparently, James Buchanan traveled to the region often in order to buy race horses and much as he had done in London, he spotted an untapped market for his product.  The rest is history, as they say ...

The Buchanan's whisky range consists of three whiskies, two of which are reviewed below.  These are the 12 years old De Luxe, the 18 years old Special Reserve and the 21 years old Red Seal.  In total the brand sells around 1.5 million cases per year, which puts it in fourth place on Diageo's best sellers list behind Johnnie Walker, J&B and Bell's.  The De Luxe is bottled at 43% ABV and costs around £35 in the UK (we are not sure of the relative costs in South America).  The Special Reserve and Red Seal are both bottled at 40% ABV and cost around the £70 and £150 mark respectively. 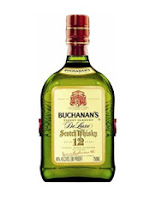 Our tasting notes - 12 years old De Luxe
The colour is a warm golden amber and the nose is mellow, but with plenty of sugary caramel aromas.  These are joined by a distinct hit of citrus peel which has elements of lemon, orange and tangerine.  There is also a hint of chocolate and peat smoke.

On the palate, there is again plenty of immediate sweetness - think of honey, chocolate and toffee - plus some creamy, soft vanilla and fresh green apple.  The orange-like tang is not as prominent but is in the background, along with faint hint of peat smoke.  The finish is much drier than expected, although some sweetness lingers with some lovely tobacco-like smoke.  This smoke is accentuated with the addition of a few drops of water.

Our tasting notes - 18 years old Special Reserve
This whisky is dark amber in colour and the nose is packed with contrasting aromas.  There is plenty of wood spice (especially cinnamon and nutmeg), along with vanilla, honey, dried fruits (think of prunes and raisins) and a hint of blackcurrant and orange zest.

On the palate, the orange zest is much more prominent and is joined by notes of sweet caramel, vanilla, honey and toasted almonds.  Further depth and complexity are added by hints of tobacco-like smoke, chocolate and coffee grounds.  The finish is soft, sweet and of decent length, with some burnt sugar and wood spice notes coming through later.  There is also a hint of orange again, although this is more reminiscent of marmalade now.

What's the verdict?
Both of these Buchanan's are lovely, with the 12 years old being the lighter of the two and the 18 years old showing richer and darker notes.  Both have good depth and complexity.  As with many of Diageo's blends we had never had the opportunity to try these due to the distribution pattern. Thankfully, we finally got to sample them at a recent event and both were enjoyable. We recommend trying Buchanan's when you are in any of the countries listed above ...

My name is Carlos Javier Contreras, and I am a Venezuelan scotch whisky blogger. Diageo's offerings here in South America also include the 15 years old Buchanan's Master, my personal favorite of the range. It was created by Master Blender Keith Law, and it keeps up with the general flavor profile of the De Luxe 12 years old, enriched by generous peat smoke.

Thanks for such a wonderful whisky blog.

Hi,
my name is Ivana. I'm Serbian. I've got a presentation flagon of Buchanan's "De Luxe" 15 year old whisky, bo.in 1980s. I couldn't find it in any of the sites. I wonder how much it would cost.
Many regards.

The Trader Joes scotch whisky is way better that this crap

John from London Ontario Canada:
On spec, picked up a 1 litre bottle of the James Buchanan 12 at the duty-free in Cancun.
I had no particular expectations when trying this for the first time and was surprised at the mellowness of this blend.
It has a wee bite at first, very agreeable flavour as the taste buds absorb it all and to my taste, a very nice after-presence. Makes me in tune with having another top-up.
FYI this enthusiast like Dalwhinnie, Bowmore, Talisker and such so you know where I'm coming from at least.
I wish Ontario imported this.

You need a degree in mechanical engineering to open the bottle.
nNewshe

Or just give it a tap

I don't understand why a screw cap would require a degree in mechanical engineering. :-)

There was a pouring mechanism in the top of my bottle that required some shaking before it would work. The scotch was smooth, easy to drink, almost sweet without actually tasting sweet. I loved it. Quality on par with glenfiddich, very easily palatable by friends who struggle with the bite in whisky

There's something in the pour spout that dissolves or releases when you shake it. Shake it before you pour it and it will start right away.

It's the best of the 12 years... blows Johnnie Walker away.

man do i feel stupid for removing the entire pouring mechanism with the fishing hook :)

Ernesto Torres, you should upgrade to paint thinner if you find anything Trader Joe brand enjoyable

Since the new bottles of buchanans started coming out the 18 year old one specificly doesn't taste the same as the older bottle the 12 year old does taste the same but th 18 used to be delicious,now it just isnt the same. Can someone please explain?