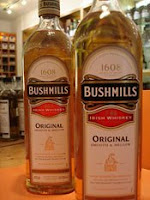 Bushmills has the oldest distillery licence in the world, dating back to 1608. This licence was granted by King James I and the distillery has just celebrated it's 400th anniversary. Bushmills is owned by drinks giant Diageo and is based in a town of the same name in County Antrim, Northern Ireland. King James I loved Bushmill's whisky so much that he had it imported from Ireland and even sold some of his own land to fund part of the distillery expansion! In addition to being the oldest distillery in Ireland and one of the oldest in the world, Bushmills also has the longest continually used logo. In 1784, the pot still logo was introduced in order to celebrate the formal registering of the distillery and this is still in use today, almost 225 years later. Their whiskies are all triple distilled in the traditional Irish way and the core range is a mixture of single malts and blends - a 10 years old, this 'Original' and 'Black Bush'. These are occasionally supplimented by special limited releases, such as the 400th anniversary celebration blend, '1608'. Sales of the Bushmills range had hit rock bottom before Diageo took over in 2005 but now sales are constantly growing, following a sustained promotional campaign. The distillery is once again running at full capacity (approx. 3 million litres per year) to meet current demand.

This whisky is a blend of single malt and Irish grain whisky and has no stated age, suggesting that some young whisky has been used. The nose is quite fresh and crisp with a herbal note (think of freshly cut grass) and some fruitiness (imagine fresh green apples and ripe peaches). A whiff of raw, young spirit gives the nose a slightly unpleasant metallic edge. This translates on to the palate, with other flavours fighting against it. This whisky has lots of cereal/ grainy based sweetness and vanilla, with a lovely fruity quality (reminding me of peaches or apricots). The finish is short and dry with just a hint of nuts and woody spice (think of nutmeg). The Original should cost around £15-20 per bottle and is good value. There is some young spirit present that gives the whisky that metallic edge but otherwise it is light, crisp, simple and pretty good. It is refreshing and would be a good one to introduce someone to whisky with.
posted by Matt C at 3:04 PM