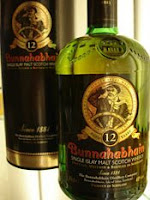 Bunnahabhain (which is pronounced boo-na-ha-ven) is located in the north of the island of Islay, which lies off the west coast of Scotland. The distillery was built in a remote spot due to the quality of the local water source and the village of Bunnahabhain was born as a result. Production began in 1881 and the distillery has had difficult history at times, with numerous owners and three periods of closure (during the 1930s, 1980s and most recently between 1999 and 2002). The current owners are a group called Burn Stewart Distillers and the distillery can produce 2.5 million litres per year. Much of this goes towards the popular Islay blend called Black Bottle, although this is changing as Bunnahabhain's own popularity grows. Bunnahabhain is the lightest of the Islay whiskies with extremely low levels of peat influence in the malted barley (around 1-2ppm) compared to nearly all the other Islay distilleries. Islay is famous for it smoky and peaty whisky and Bunnahabhain is very much the black sheep of the family. The core range has only three whiskies - this 12 years old and two more limited releases, an 18 years old and a 25 years old. Independent bottlings are readily available.

The nose has a lovely fresh sweetness to it, with vanilla and caramel coming through. These are joined by a distinctive saltiness (imagine seaweed or sea air) and this is common in whiskies that are matured by the sea, as Bunnahabhain is. Over time, the porous wood of the casks breathes in the salty sea air and this is transferred to the whisky. On the palate, this is gentle and smooth with lots of malty sweetness and dried fruitiness (imagine sultanas). That saltiness is present, giving the whisky a briny quality, which sounds unappetising but is actually refreshing. There is also something nutty and herbal. The finish is quite short and refreshing with an interesting herbal bitterness. This is completely different from any other whisky from Islay and is worth a try. It should cost between £25-30 a bottle.
posted by Matt C at 11:14 AM