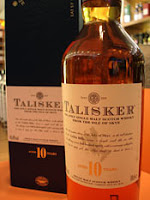 Talisker is the only distillery on the island of Skye, which lays off the north west Highland coast. The distillery is owned by drinks giant Diageo and they have given the brand a lot of promotion, resulting in sales rising by 40% in the last three years. Talisker is an iconic Scottish whisky and continually wins prizes around the world, culminating in their 18 years old winning 'Best Single Malt' at The World Whisky Awards in 2007. The distillery was founded in 1830 at a remote location on the island and it is still tricky to get to today. That doesn't stop people getting there though and Talisker is one of the most visited distilleries in Scotland. Some of the whisky produced goes towards Diageo's famous Johnnie Walker blended whisky range but most is released as single malts. The core range is small but excellent and contains this 10 years old, the 18 years old and a 'Distiller's Edition' that is finished in Amoroso sherry casks. A 25 years old and a 30 years old are also released as limited editions. Independent bottlings are rare and when they are released the bottlers are not allowed to name it Talisker under a 'gentleman's agreement'. Two of the most popular independent bottlings are called 'Tactical Director's' and 'Isle of Skye'.

Talisker has a mid level of smokiness (22ppm) and this comes through on the nose. The peatiness is there but it has a fiery and spicy edge to it. There is also a hint of dried fruit, a citrusy tang and a whiff of salty sea air. On the palate, this instantly explodes in your mouth with a mixture of that fiery spicy smoke (think of black peppercorns), caramel and sweet malted barley. It feels full bodied and that hint of saltiness from the nose is present also. The finish is long with a perfect mix of peaty smoke and peppery spiciness (those black peppercorns again). Talisker is a classic whisky. The pepperiness gives it a unique quality and flavour among Scottish whiskies. It is readily available in supermarkets and independent shops alike, and can cost anywhere between £28-35 a bottle. A whisky that just has to be tried.
posted by Matt C at 11:24 AM