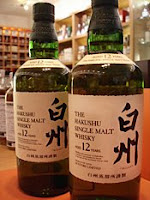 Hakushu is a Japanese whisky and the distillery was opened in 1973. It is located in a nature reserve on the slopes of Mount Kaikomagatake, which lies to the northwest of Tokyo. The location is reflected in the name as Hakushu means 'forest distillery' in Japanese. A second distillery was built next to the original in 1981, making Hakushu one of the largest malt whisky distilleries in the world with an incredible 24 pot stills. The new distillery was named Hakushu East and the older was renamed Hakushu West. Both were run side by side for a number of years before the owners, Suntory, decided to close Hakushu West. All whisky is now produced at Hakushu East, which has a capacity of 3 million litres per year. The whisky is matured mostly in bourbon casks but some spends time in sherry and Japanese oak casks. Hakushu also filter their whisky after maturation through bamboo charcoal, creating a unique character within the spirit. They are the only Japanese distillery to practice this technique.

The colour is light and lemony with an interesting nose. It is light and fresh with some crisp green fruit (think of pears and apples), some gorgeous vanilla, something floral (reminding me of honey suckle) and just a whiff of smokiness (imagine wood ash). This feels thicker on the palate than the nose suggests and is quite creamy with all elements from the nose combining well. There is also something herbal and grassy, as well as a warm spicy note (ginger, I think). The finish is quite dry, crisp and light with the warm spice, that hint of smoke and a nutty (think of almonds) quality coming through. A bottle of this should cost between £45-50 and it is well worth it. This whisky has lots to offer with a decent nose being followed up with a sumptuous crisp palate that combines all the elements very well. This is high quality malt and a great example of Japanese whisky.
posted by Matt C at 11:25 AM