In the whisky cupboard ... Mackmyra Preludium 04 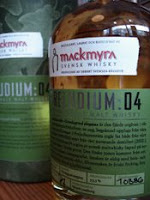 Mackmyra is a distillery based around 170km north of Stockholm, near to the town of Gävle in Sweden. The Swedes love their whisky and Mackmyra was the brainchild of a group of friends, who decided to set up a new whisky distillery. It started on a small scale in 1999 and was upgraded in 2002 and full production started. Their first official release was released in Sweden in June 2008 and sold out in hours. Prior to this they have released a series of limited edition preludes (around 4000 bottles of each), starting with the Preludium 01 in 2006. Within this series, they have experimented by using different casks and methods in order to produce highly innovative and interesting whiskies using local ingredients. The distillery's reputation is growing fast and everything sells out quickly.

This is the fourth in the Preludium series and is a young whisky of around four years of age. It has been matured in a combination of bourbon cask, then a fresh Swedish oak cask and then a champagne wine cask. The colour is light and quite grassy (like hay). The nose has a gorgeous freshness to it, with a mixture of sweet vanilla and crisp fresh fruit (think of green apples and white grapes). On the palate, there is a definate white wine element that is fresh, crisp and quite dry (similar to the champagne that had formerly in one of the casks). This mixes with that vanilla and fresh green fruit and is fairly light, refreshing and zingy in the mouth. The finish is quite long and very enjoyable. This is very well balanced, enjoyable and quite complex for such a young whisky. The alcohol level is quite high (around 50% ABV) but you don't notice this at any time, unlike in other young whiskies. The experimentation with different casks is innovative and has produced whiskies that taste and feel different to traditional malts. This Preludium shows great promise and it will be very interesting to see how Mackmyra whiskies progress over time.
posted by Matt C at 12:24 PM

Hi! Just a small note:
You will not find the Mackmyra distillery just outside Stockholm, but just outside Gävle (170 kilometers north of Stockholm).

Just in case anyone was planning to visit.