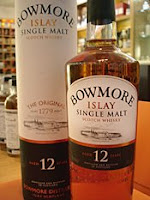 Bowmore is located on the western island of Islay, which is the home of smoky whisky. The distillery is the oldest in operation on Islay and one of the oldest in Scotland, having started production in 1779. It is situated in the village of Bowmore (which translates as 'sea rock' from Gaelic), on the picturesque shores of Loch Indaal. Bowmore is one of the most famous whiskies in the world and the number of different releases is extensive. the core range consists of this 12 years old, a 15 years old 'darkest' and an 18 years old. These are joined by more limited releases from time to time, including some very old and rare whiskies such as the White Bowmore (43 years old!) which has just been made available for around £2500 . independent bottlings are also fairly common. The current owners, Morrison Bowmore (who in turn are owned by Japanese distiller Suntory), have also established another range of whiskies that are available exclusively for travel retail/ duty free. The strategy has led to Bowmore becoming one of the top brands worldwide, within that sector of the market.

This 12 years old is the cornerstone of the range and is one of the best selling whiskies in the UK and the world. The colour is a golden amber and the nose is different to a number of the other heavier islay malts. There is smokiness and peat but it is light and fresh with some butterscotch, some saltiness (imagine brine) and a floral note evident (think of lavender maybe?). The whisky is smooth and kind to your palate with lots of vanilla present, some oakiness, that salty note and a lovely sweetness coming from the malted barley. The smokiness come through afterwards and has an earthy quality, but reminded me most of dying embers/ ash in a fireplace. The finish is dry, salty and reasonably long but not as long as heavier Islay malts. The balance between the lower level of smokiness and the influence of the casks is very good and while this is not the most complex whisky, it is an excellent all rounder that would be a good choice to introduce someone to smoky whiskies. Its quality is reflected in the fact that this 12 years old consistently wins awards around the globe, most recently picking up The Whisky Shop's 'Single Malt of the Year 2008'. A bottle should cost £25-30 and is readily available.
posted by Matt C at 11:02 AM

Wotcher, Matt. Tom's just pointed me in the direction of this 'ere blog and I'll be following it from now on.