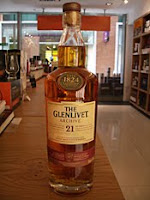 Glenlivet is one of the most famous names and brands in the world of whisky. It is located in the Speyside region, close to the town of Ballindalloch in the scenic Livet Glen, and is one of Scotland's largest with an annual production of nearly 6 million litres. The distillery is currently owned by drinks giant Pernod Ricard and their influence, since taking over in 2001, has seen Glenlivet become one of the best selling single malts in the world. It is second for overall world sales (behind Glenfiddich), third in the UK (behind Glenfiddich and Glenmorangie) and the best selling single malt in the USA. The sales continue to grow, especially in expanding markets such as south east Asia.

Glenlivet was founded in 1824 by George Smith, whose signature still appears on the labels and packaging, in old farm buildings and it takes its water from the nearby River Livet. The award winning visitor centre at the distillery is one of the most visited in Scotland. A small percentage of whisky produced at Glenlivet is used in Pernod Ricard's popular Chivas Regal range of blended whiskies but most is reserved for release as single malt. The range of single malt whisky is extensive, including 12, 15, 18, this 21 and 25 years old plus older releases and different cask finishes, as well as exclusive bottlings for the duty free travel retail sector.

The colour of this Glenlivet 21 years old 'Archive' is a dark reddish amber. The nose has a rich, sweet aroma that has plenty of malted cereal grains, dried fruits (think of sultanas, raisins and candied orange peel) and spiciness (imagine cinnamon). There is also a touch of herbal grassiness (think of dried grasses) and a distinct characteristic that is difficult to pinpoint, but can be best compared to a waxy furniture polish. The palate is rich, sweet and creamy. First comes a hit of sugary dried fruits (the sultanas and orange peel again) and malty grains and this is followed by a nuttiness (think of a creamy style of nut like almonds or hazelnuts) and more woody spices (imagine cinnamon again, but slightly more than the nose suggested). There is also some honey and oak elements. The addition of water brings out the orange zestiness especially. The finish is long, rich and sweet at the beginning before turning drier and particularly woody and spicy (that cinnamon again - it just won't go away!).

This is a great dram that is smooth and creamy yet rich and extremely complex. It is definitely a whisky to sit back, sip and enjoy. The 'Archive' demonstrates how older whisky can be sympathetically matured in sherry casks without the sherry influence taking over the original spirit. It also offers reasonable value with a bottle costing £70-80, depending on where you find it. A top quality product.
posted by Matt C at 7:17 AM

Hi, enjoyed the review. I notice you often include information about the sales rank of the distillery and I'm curious where you find that information?

Dear GG
I use information from the Malt Whisky Yearbook - they have a very good stats section in the back that tells you all sorts of information.

Hello, thanks for the review but there are two Glenlivet Archive Whisky on the market. There is the one that you reviewed and a Glenlivet Archive Limited Edition - I am keen to buy it but do you know anything about it?

Very similar idea with the discontinued Dalmore 21. It was entirely aged in sherry casks, but the result was rather subtle. If that is the case with this Glenlivet, I may have to give it a shot : )