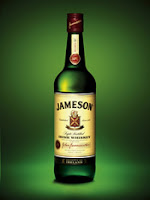 Jameson whiskey is one of Ireland's most famous exports and has been the best selling Irish whiskey in the world for over 100 years. The whiskey was first produced by John Jameson in 1780 at the Bow Street distillery in the heart of Dublin. By the early 1800s, the distillery was producing one million gallons (4500 litres) of whiskey per year and had grown to be the largest in the world. The production has now moved to the Midleton distillery and the Bow Street site is currently a museum and visitors centre. Jameson is made following the original 1780 recipe that uses malted barley combined with unmalted barley and other grains. It is distilled three times in copper pot stills to create its famous smoothness and flavour. Jameson sells a staggering 30 million bottles a year around the world, making it by far the biggest selling Irish whiskey.

Jameson whiskey is currently made at the Midleton distillery in County Cork in the south of Ireland. It is a modern distillery and was built in 1975 following the amalgamation of three powerhouses of the Irish whiskey industry in the 1960s - the Cork Distillers Company, John Jameson and John Powers. They built the new distillery and it is now the largest in Ireland and one of the largest in Europe with an annual capacity of 19 million litres. Numerous famous names of the Irish whiskey industry are now made at Midleton, all to their original traditional recipes. These include Jameson, Midleton Rare, Paddy, Powers, Redbreast and Tullamore Dew. The new distillery replaced the previous Old Midleton distillery that had been operating since the 1820s and is now a tourist visitor centre.

This Jameson Irish Whiskey with its famous green bottle and cream label is the cornerstone of the Jameson core range and whiskey empire. It is golden amber in colour with an aromatic nose. There is some initial sweetness which incorporates vanilla, dried fruits (think of sultanas plus candied orange and lemon peel) and cereal grains. Then comes a savoury/bitter note that is hard to pin down but is most reminiscent of oaky wood. On the palate, this feels thick, rich and a little oily in the mouth with the vanilla, dried fruits and cereals all present again. The citrus peel and zesty notes are particularly prominent and enjoyable. There is also some further sweetness (think of honey) and this is balanced by some bitterness (imagine grain husks and wood) and a distinct spiciness that appears (think of nutmeg and cinnamon). The finish is relatively short with a sweet, creamy beginning (vanilla and citrus zest again) before turning spicy (that nutmeg again) and slightly bitter (imagine husks of grain).

Jameson Irish Whiskey is a very good all round whiskey and it is easy to see why so many people enjoy drinking it around the world. It is not the most complex of whiskies but is full of character and is smooth, rich and flavoursome. The whiskey is well made and would be a great suggestion if you want an easy drinking everyday Irish whiskey in your cabinet. This Jameson is widely available. It also offers good value at around £15-18 a bottle and can occasionally be picked up cheaper in supermarket promotions.
posted by Matt C at 11:52 PM